OnePlus has launched a bunch of smartphones this year, and now, it seems like the company has started manufacturing smartphones for the next year. Here, we are talking about the OnePlus 9 series which is tipped to launch in March 2021. The alleged OnePlus 9 has now been spotted on the Geekbench bearing model number LuBan LE2117. 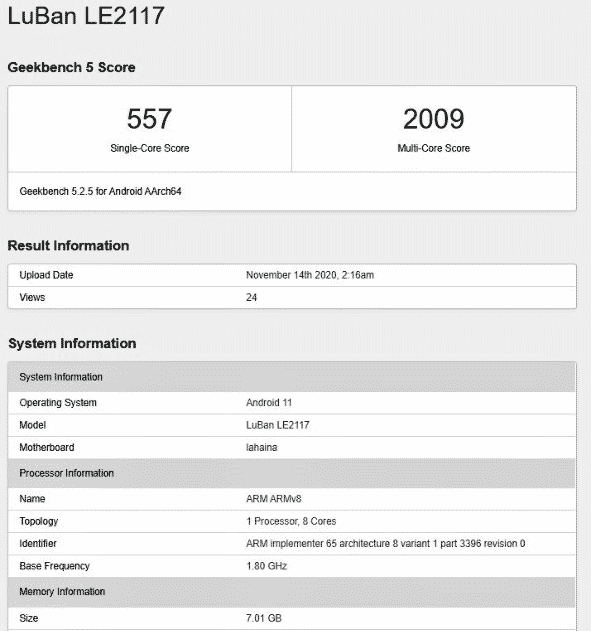 As per the Geekbench listing, the LuBan LE2117 (alleged OnePlus 9) has 8GB of RAM and boots the latest Android 11 OS out of the box. The motherboard mentioned in the listing is codenamed “lahaina” which reportedly belongs to the Snapdragon 875 chipset. The chipset has a total of 8 cores and a base frequency of 1.8GHz. The smartphone has managed to score 557 points in the single-core test and 2009 points in the multi-core test. A recent report by 91Mobiles reveals the design and some key specs of the OnePlus 9. According to that, the phone will have a total of 3 camera sensors on the back along with an LED flash.

The display is said to flat and a bit larger than the OnePlus 8T‘s display but the rear side is curved at the edges. OnePlus 9 is expected to feature a 120Hz refresh flat display, 65W fast charging, IP68 rating, and NFC