Latest File manager app “Files Go” From Google is now available as an APK File: Google has developed the Android operating system and we have recently known that the popular operating system had its 10th anniversary earlier this month. However, one app that has been missing from Stock Android is the Files manager app which is used to see the contents of the phone and do some operations like copying, pasting and even unzipping files.

It is not that there was no file manager app from the beginning in Android. In fact, there were many apps like File managers present in Stock Android but they were not capable enough to do some tasks that were able to be done easily by third-party file managers. Due to this reason, third-party apps like ES File Explorer and Solid Explorer are now sitting happily at more than 10 Million+ Downloads due to the lack of file managers built into the system.

Even the smartphones like Google Pixel and Pixel 2 which have been marketed as ‘Made by Google‘ come without a proper file manager app inside them. However, this is about to change now as Google has ‘finally’ made a file manager app for Android which is expected to be built into Stock Android in the coming releases. However, at the moment this will be available for download from the Google Play Store as a separate application just like any other application from the Play Store.

It is also worth noting that Google has not released this app, it is still in the Beta testing stage but one of the testers has leaked this app to the public and we have tested it on your smartphone and this app works without any issues on all the smartphones. Now, you should download this app from the link mentioned down below and install this app as a normal apk file by clicking on the downloaded file and hitting ‘install’ on the next screen. 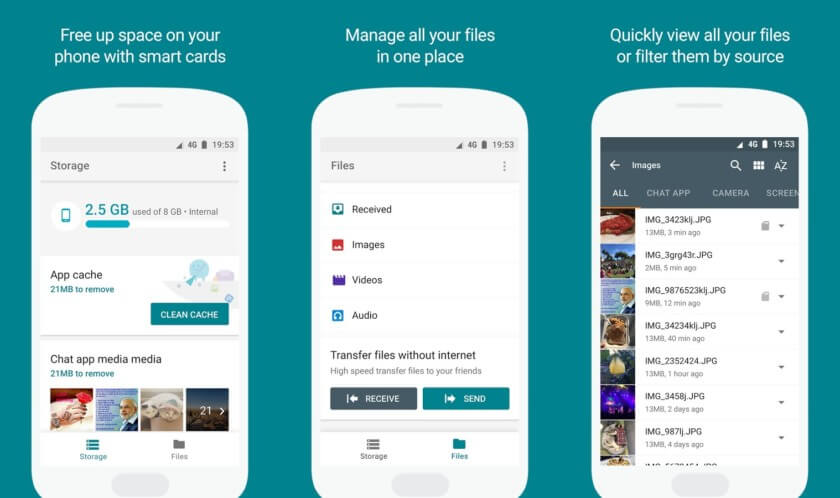 Download Google Files Go APK
rootmygalaxy.net is one of the leading tech blogs started in 2014. Our stories have been picked up by the likes of Forbes, Foxnews, Gizmodo, TechCrunch, Engadget, The Verge, GSMAreana, and many others. Want to know more about us? Head here. You can follow us on Telegram, Twitter, Instagram and Facebook
Facebook0Tweet0Pin0Email0