Xiaomi is set to launch several smartphones later this year, most of them have been traced and most of them are still unknown. Xiaomi always tries to add unique names or code names so that models cannot be traced or found. Well, Xiaomi needs to work hard as several models have been appeared on the network site confirming a global launch later this year. The Site did not reveal its actual marketing name however you can see that new models and traced models are there. The Xioami 12T products are also listed which are rumored to be Xiaomi 12T, and Xiaomi 12T Hypercharge. According to recent reports, Xiaomi will be launching a total of 5 models from the Redmi K50S series and Xiaomi 12T series this year which are respectively the Redmi K50S Pro, the standard Redmi K50S, the standard Xiaomi 12T, Xiaomi 12T Pro, and Xiaomi 12T Pro HyperCharge.

Moreover, multiple upcoming Xiaomi, Redmi, and POCO devices have been spotted on Russia’s EEC certification database. Starting with the Xiaomi devices, they have the model numbers 22071212AG and 22081212UG.

According to the model information, This lineup will fall later this year and so on, be informed prefix “22” is the year, then the month and last post fix are “regions”, and “I” Stands for India. 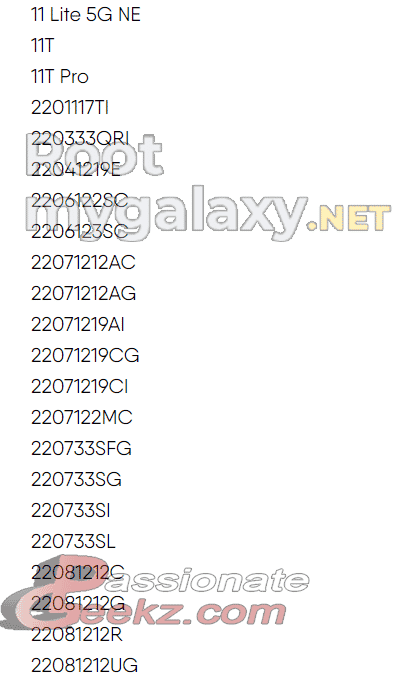 Moreover, the Xiaomi 12T is speculated to arrive with the latest Snapdragon 8+ Gen 1 processor under the hood. The phone is said to come in three storage variants- 8GB RAM 128GB storage, 8GB RAM 256GB storage, and 12GB RAM 256GB.

The listing does not reveal any specifications of the upcoming Xiaomi/redmi or poco devices, however, going by the previous report, we know that these smartphones will be the rebranded variant of the China-exclusive Redmi K50S and the Redmi K50S Pro Hypercharge. Unfortunately, not much is known about those upcoming smartphones either other than they will come powered by the recently revealed Snapdragon 8+ Gen 1 chipsets.