Samsung Galaxy Alpha is amid-range Android device, released their  budget android phone.It comes with android 4.4.2 KitKat out of the box.It is powered by an octa-core (quad 1.8GHz + quad 1.3GHz) processor and has a 4.7 inch screen. The Galaxy Alpha has an 1860mAh battery, 2GB of RAM, and Super AMOLED capacitive touchscreen with 1280 x 720 pixels resolution and 16M color support.Remember there are many variants of the device in the market.Supported devices will be listed out.

Supported Devices: This guide is only for Samsung Galaxy Alpha model no. S850W /S801 & model no. S805S/K/L.The CyanogenMod 13 ROMs are different for these two model developed and posted by different developers.

As I mentioned before, this is an unofficial CyanogenMod ROM.It is developed by kyasu, Senior Member from Xda (For Model no. S850W) and by SerenityS, Xda Member (For S850S/K/L).These ROMs are based on CM13 Source code and Android marshmallow 6.0.This is in alpha stage that means there will be few bugs present.But in future updates, they will fix all the bugs.Check out the XDA thread for full details on this ROM For Galaxy Alpha S850S/K/L (Bug list)

You can use the CM13 ROM On S850W as a daily driver as there is no major bug present but don’t use the CM13 On S850S/K/L but if you want to experience Marshmallow Android 6.0 On your Galaxy Alpha then you should try this ROM but take a proper nandroid backup

→This is only for Galaxy Alpha so don’t try this on other models. (model numbers are listed above)

rootmygalaxy.net will not be held responsible for any kind of damage occurred to your  Galaxy Alpha while following this tutorial.Do it at your own risk.

How To Install Guide 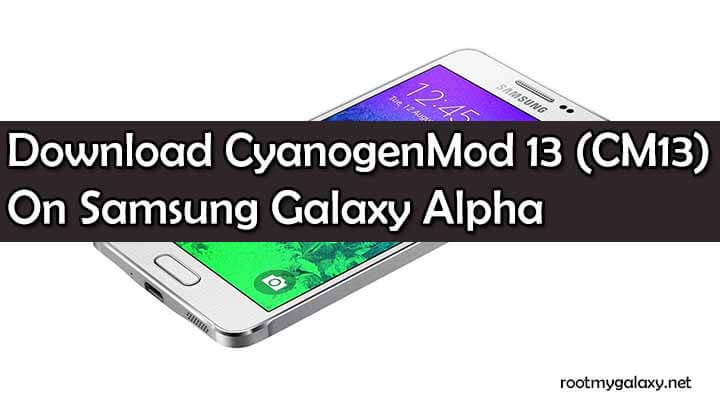