In this guide, you will learn How to safely  Install TWRP 3.0 & Root HTC One M9 On Android Marshmallow 6.0.1.As you guys know Htc One M9 is updated to latest marshmallow 6.0.1 by HTC.So now you have to install TWRP 3.0 on the device then you can root it by flashing the latest SuperSu.zip file via TWRP recovery.Just follow the given steps to get root access on Htc one M9 running Android 6.0.1 marshmallow

Htc M9 was Launched in March 2015 and was the flagship from Htc.It is the successor to the very popular Htc One M8.It comes with 5.00 inches with 1080 pixels by 1920 resolution & is powered by 1.5 GHz octa-core Qualcomm Snapdragon processor 810 coupled with 3GB of RAM.It has 32GB of internal storage which can be expanded up to 128 GB through a microSD card.the HTC One M9 comes with a 20-megapixel rear camera and a front shooter 4 Ultrapixel shooter.

Htc has started updating Htc one M9 to latest Android 6.0.1 marshmallow.If you have updated your device to the latest firmware, then you must have lost the root access on your device.You have to manually install the TWRP 3.0 on your Htc one M9 again.Mazke sure you have a windows PC with Adb & Fastboot drivers installed.Here we will be using Fastboot commands to install the TWRP recovery on Htc One M9.

After Installing the TWRP 3.0 On Htc One M9, you can flash the latest SuperSu root pack via TWRP recovery to regain the root access on your device.It is a very simple and easy process.Just follow the step by step guide given bwlow to Safely Install TWRP 3.0 & Root HTC One M9 On Android Marshmallow 6.0.1

rootmygalaxy.net will not be held responsible for any kind of damage occurred to your Htc Oe M9 while following this tutorial.Do it at your own risk.

→As you guys know, inorder to root Htc one  M9 On Marshmallow we have to install the TWRP recovery first then we can flash the SuperSu root file to get root access. 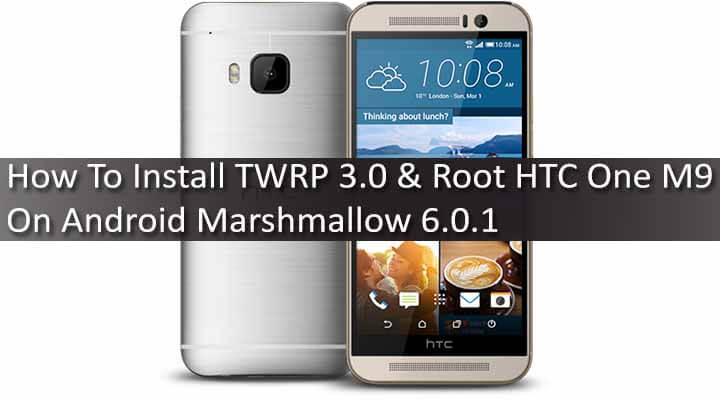 → First read the Pre-requiremet section carefully then follow the steps to Install TWRP 3.0 & Root HTC One M9 On Android Marshmallow 6.0.1

TWRP 3.0 is now sucessfully installed on your Htc One M9 🙂

If you have any question related to this post feel free to leave that in the comment section.