Safety and security are paramount in today’s tech-savvy world and a VPN goes a long way in making sure that your data remains safe and out of the hands of wrongdoers. iTop VPN is a tremendous VPN option and it offers a lot of exciting features. While it’s a free VPN service, there are also a couple of easily affordable paid plans available.

Paying for a subscription will give you access to over a hundred locations, more than 1,800 streaming, and gaming-optimized servers. There’s also split tunneling alongside ad tracker, malware blocking, browser history cleaning, and a Security Reinforce tool that checks the device privacy settings and warns you of potential problems.

How to install the iTop VPN on your Windows PC?

You might encounter a few hiccups when you’re installing a VPN client but the process to download and install the iTop VPN is rather simple. All you need to do is visit the official website of iTop VPN and download the executable installer. After that, follow the default Windows wizard instructions and you’ll be good to go.

You might run into trouble when looking to unlock VIP features. When you open the app first, you aren’t prompted to log into your account. The default experience with the free version of iTop is good enough on its own. Logging into the VPN isn’t rocket science, you’ll have to enter your credentials in the bottom-left corner of the screen. It’s still an extra step and it could cause some confusion among first-time users.

Another great thing with this VPN is that it isn’t just available for Windows users but it’s available for all major platforms including Android, iOS, and more.

How safe is iTop VPN?

iTop VPN is an extremely safe VPN app. While the app doesn’t necessarily employ the most advanced encryption protocols, it still does a great job protecting your data. It has got a strict no-logging policy and a killswitch if your internet connection fails abruptly. This VPN makes use of military-grade 256-bit encryption, the same type used by most VPNs. However, it just has three different encryption protocols at its disposal.

Although this might seem complicated, the key takeaway is that iTop VPN is a secure VPN but it isn’t as secure as some other VPN options. Other VPNs use more advanced encryption protocols like IKEv2, OpenVPN, L2TP/IPSec, or WireGuard, which make them more secure. This isn’t necessarily a compromise on online security. In fact, the lack of an OpenVPN protocol poses compatibility issues.

iTop VPN comes with support for a kill-switch to stop internet traffic in case the VPN drops unexpectedly. The iTop VPN Windows app works seamlessly and does a great job protecting your data.

Split tunneling support will allow you to decide which app is using the tunnel and which ones aren’t. It’s handy if you require the VPN to unblock a few websites as other apps can utilize your normal and faster connection. It’ll direct only browsers through the VPN by default while making it easy to add other apps as needed.

The DNS Protection feature will protect your DNS settings from modification by malware. You’ll even be able to set your DNS to one of the several public DNS providers by easily choosing them from a list – Google, Verizon, OpenDNS, Comodo, and DNS Advantage.

The VPN comes with a handful of settings. You can launch it when you boot up Windows and choose one of the three protocol options – UDP, TCP, and HTTPS. Choosing TCP will get you high-level privacy and better security while going for UDP will mean faster speeds but more data usage.

Another great feature of the iTop VPN is its no-logs policy. It means that your data is totally safe when using the VPN service. According to iTop, the iTop VPN for Windows sticks to the No-Log Policy, which means that under no circumstances will the VPN track or record any information about your profile. 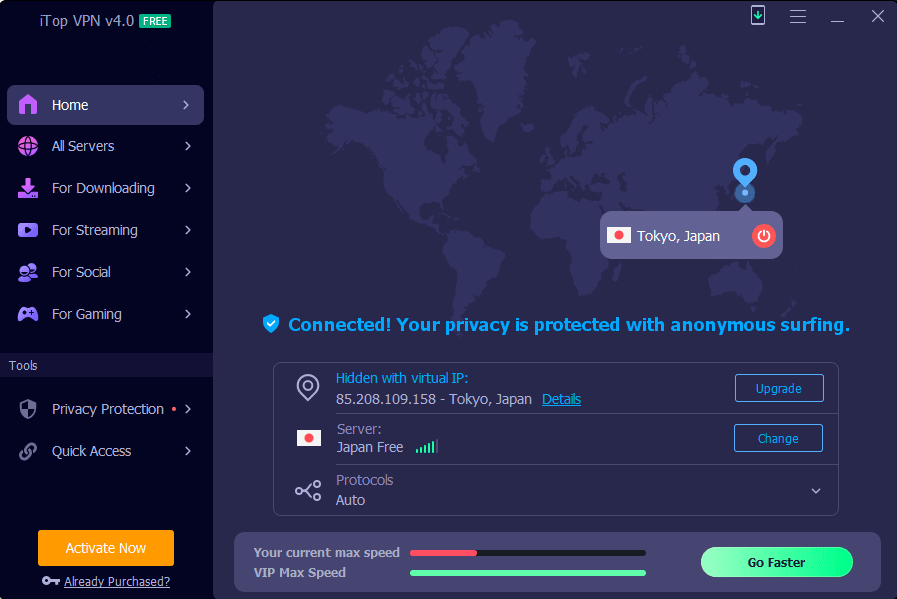 The VPN is highly intuitive and simple to use. You can use it on a daily basis and it’ll work just fine. While iTop VPN offers more options than your average VPN, you can still get the hang of it within a short span of time. This VPN offers dedicated servers for gaming, streaming, or social media use. If your needs aren’t among these categories, you can simply click on “All Servers” and it’ll open up a list of all iTop servers that you can use.

iTop VPN has numerous privacy and security extras that aren’t necessarily seen in most other VPNs. A Security Reinforce module will scan your PC for weak or non-standard security knowledge to properly understand its report. This will greatly improve your system security.

The Browser Privacy feature will check and clear the browsing tracks in Chrome, Firefox, Edge, Opera, and Internet Explorer.

There’s more power with this VPN than expected. For instance, DNS Protection isn’t something that iTop VPN just threw in an afternoon. It’s an IObit feature that is taken directly from the IObit Malware Fighter. Put everything together and the bonus security features can have high value for experienced users.

iTop VPN might not be the most elite VPN option but there but it’s still a fairly safe and secure VPN choice for users. It works very well and has a large server network. Moreover, it is pretty affordable for long-time commitment and offers enhanced security to its users. The dedicated servers will make it easy for users who are looking to get this VPN for a specific purpose. Its kill-switch feature stops the internet traffic if the VPN drops unexpectedly. There are multiple encryption protocols, which the user can decide depending on whether they want more speed or a higher level of privacy. 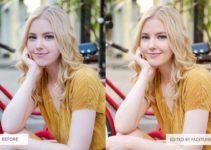