This tutorial will guide you on How To Make Galaxy Note 5 Feel Like A Nexus.Simply we can call it Nexify your Note 5.The process is simple and doesn’t need root.Using all the given steps you can convert your Note 5 into a Nexus devices like Nexus 6p,6 or 5x. (Look & Feel)

This Guide is basically for those people who don’t like TouchWiz and want to experience Stock Android On Note 5  without Rooting and installing other AOSP ROM.If you one of them the just follow the Guide to Make Galaxy Note 5 Feel Like A Nexus Device

Samsung Galaxy Note 5 was released back in August 2015 with Galaxy S6 Edge Plus.This is the predecessor to the last year Phablet Note 4.If you want me to describe Note 5 in one word then it will be Beast.The Note 5 Features a Premium Build quality & elegant design.In the specs department, it is the best phone you can get in the market.The Galaxy Note 5 also sports a superb camera and considered as the best smartphone camera by many tech geeks.For more info on specs visit this link.

Samsung Note 5 comes with Android lollipop with Samsung’s own skin TouchWiz.The TouchWiz UI has been improved over the years by Samsung.But if you buy a carrier based Samsung device, then the phone will come with tons of bloatware pre-installed and it makes your device laggy.Though TouchWiz looks and feels good now, it is nowhere compared to the Stock Nexus Look & Feel.So in this guide I am going to share How you can make Galaxy Note 5 feel like A Nexus device or you can say How to Nexify Note 5 (without Root) 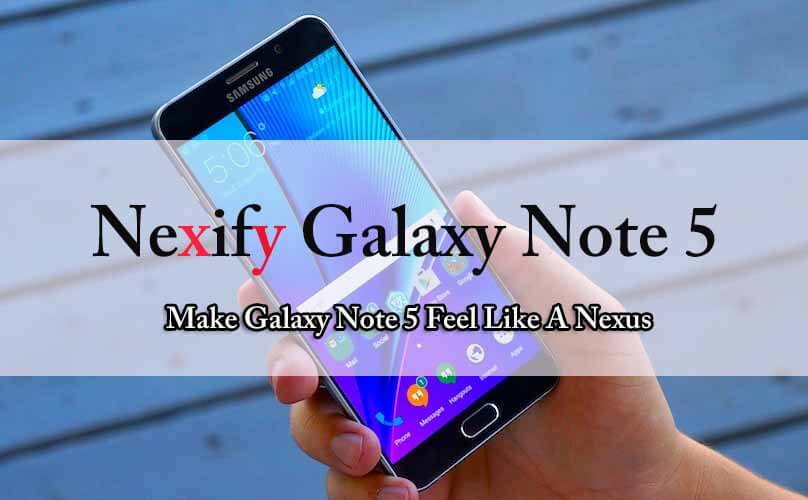 → Download the Google apps listed below and replace them with TouchWiz apps.

Everything is done now.Now you can download Stock lollipop wallpapers or Marshmallow wallpapers from google play store or from external sources.

That’s all you have successfully Nexified your Note 5.Enjoy 🙂