There are loads of extra customization and optimization features added to Android Marshmallow 6.0.The most popular one is DOZE mode resulting in a great battery life.It also brings many new bug fixes, security updates, and stability improvements.We highly recommend you to Download & Manually flash Official Android 6.0 Marshmallow RUU On Htc Desire 626s

Htc Desire 626s is a 1-year-old device and being a mid range phone it got the update after the flagships.It was launched last year and comes with  Android 5.1 Lollipop with HTC Sense. It has a 5-inch 720P HD Display.This phone is  powered by a 1.2GHz Quad-core Qualcomm Snapdragon 210 processor which is coupled with 1GB RAM.It comes with 8GB internal memory which is expandable up to 256GB via microSD card.It sports an 8MP rear camera and a 2MP front camera.It has a 2000mAh battery.Overall all this is a great mid-range android device so there are many users using this as their daily driver.

rootmygalaxy.net will not be held responsible for any kind of damage occurred to your Htc desire 626s while following this tutorial.Do it at your own risk. 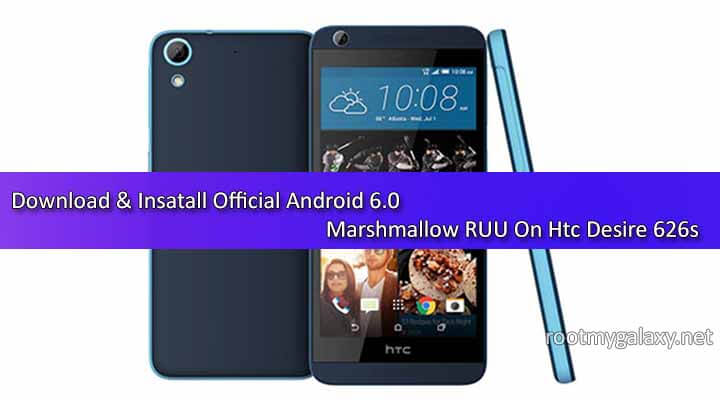 If you have any question related to this post feel free to leave that in the comment section. 🙂