Nokia is reportedly working on a smartphone codenamed as Doctor Strange. The official name is not revealed yet but some reports suggest Nokia 3.4. Recently, the device appeared in Geekbench listing with Snapdragon 460 SoC, 3GB of RAM, and Android 10.

Now, a reliable Nokia leaker @Hikari_Calyx has posted a render of Nokia 3.4 aka Doctor Strange. The front image shows punch-hole design selfie camera at the upper-left side. On the rear side, we can see a triple camera setup arranged in a circular manner, and below is a fingerprint scanner. 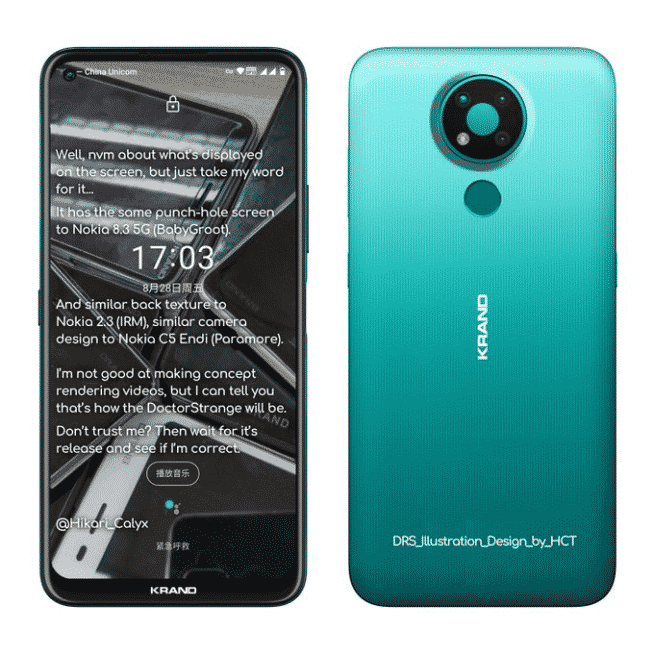 As per some recent reports the Nokia 3.4 will feature 6.5-inch HD+ display with a punch-hole cutout and 19:9 aspect ratio. It will be powered by Snapdragon 460 SoC paired with 3GB/4GB of RAM and 32GB/64GB storage.

As for the camera, the phone has 8MP selfie camera and 13MP + 2MP + 5MP triple camera setup on the rear side. The phone packs 4,000mAh battery and a slow 10W charger. On the software side, the handset will run Android 10 out of the box. Other features include – rear fingerprint scanner, Bluetooth 5.0, 4G LTE, micro-USB, a separate Google Assistant button, and a 3.5mm headphone jack.