Samsung has started rolling out the latest Official Android 6.0.1 Marshmallow Firmware OTA Update for Samsung Galaxy On5 G550FY.This is a great new for all Galaxy On5  users.Previously Samsung has Updated its Galaxy On7 to official Marshmallow 6.0.1.This update is available via OTA (Over-the-air).You can manually check for the marshmallow update from the setting app itself

Galaxy On5 is the smaller brother of On7 smartphone which was launched in October 2015.It comes with the 5.0.2 Version out of the box then it was updated to Android 5.1.1 Lollipop and now it is getting the latest Android Marshmallow 6.0.1 Update which is a great news.But remember now the update is only available for Indian users but it will be available in other regions in coming days.

The Marshmallow update is available via OTA (Over-the-Air).The OTA Firmware file is around 1.12GB in size.This update is only for SM-A550F Indian variant so don’t try on other models.Thanks to Samsung-updates, now we got the OTA Update file (.tar).You can download the OTA Update file from the download section and Update Samsung Galaxy On5 to Marshmallow Manually by flashing the Firmware file using Odin Flash tool.Don’t worry we are sharing step by step guide to Install Official Marshmallow 6.0.1 On Samsung Galaxy On5 SM-G550FY
[symple_box color=”green” fade_in=”false” float=”center” text_align=”left” width=””]Must Read[icon name=”hand-o-right” class=”” unprefixed_class=””] How to Uninstall System Apps on Android Without Root [/symple_box]
The stock marshmallow ROM for Samsung Galaxy On5 SM-G550FY is very stable with minor bugs.You can use this as your daily driver.It comes with loads of extra useful features, security and stability updates.You will also get the DOZE Mode resulting in good battery life.This update comes with loads of bug fixes.
[symple_box color=”gray” fade_in=”false” float=”center” text_align=”left” width=””]

About Galaxy On5 Marshmallow Firmware:

rootmygalaxy.net will not be held responsible for any kind of damage occurred to your Galaxy On5 while following this tutorial.Do it at your own risk.

HOW TO MANUALLY INSTALL OFFICIAL MARSHMALLOW 6.0.1 ON SAMSUNG GALAXY ON5 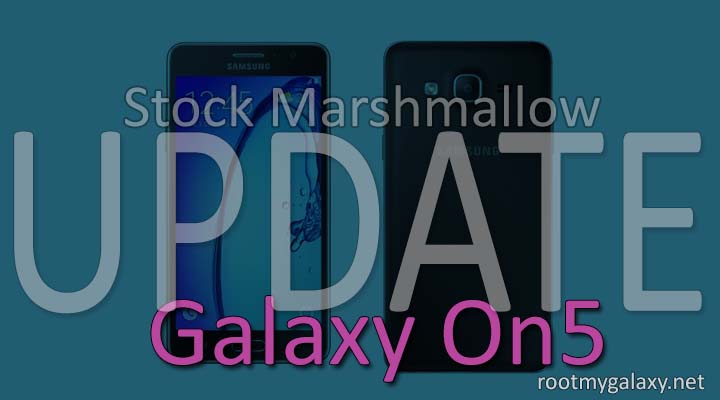 2 thoughts on “Download & Install Official Marshmallow 6.0.1 On Samsung Galaxy On5”