OPPO is gearing up to launch a new version of OPPO A33 which was launched back in 2015 with budget specifications. The upcoming OPPO A33 with model number CPH2137 now clears Thailand’s NBTC certification. The certification confirms its moniker and shows a 4G connectivity. Previously, the OPPO CPH2134 was spotted on multiple certification authorities which includes TKDN, Indian BIS, and SDPPI. 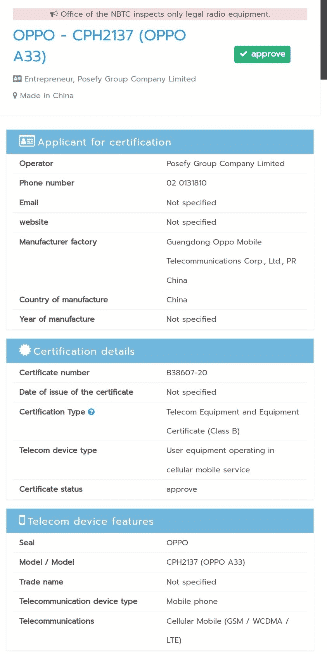 We can expect the device to feature improved cameras, a decent battery life, and a good budget processor as compared to the previous OPPO A33. The A33 from 2015 comes with a 5.0-inch LCD display, 8-megapixel rear camera, and a 5-megapixel front-facing camera.

Under the hood, it is powered by Qualcomm’s Snapdragon 410 chipset paired with 2GB of RAM and 16GB internal storage. There’s a microSD card slot to expand the storage. The OPPO A33 houses a 2,400mAh battery with no scope for fast charging. As for the connectivity, it comes with Bluetooth 4.0, Wi-Fi, GPS, MicroUSB, and a 3.5mm headphone jack.