A new Oppo smartphone bearing model number OPPO PDSM00 has been spotted on Geekbench along with its key specifications. The marketing name of the Oppo PSDM00 is currently known, but speculation believes that it could be the upcoming Oppo Reno5 Pro. 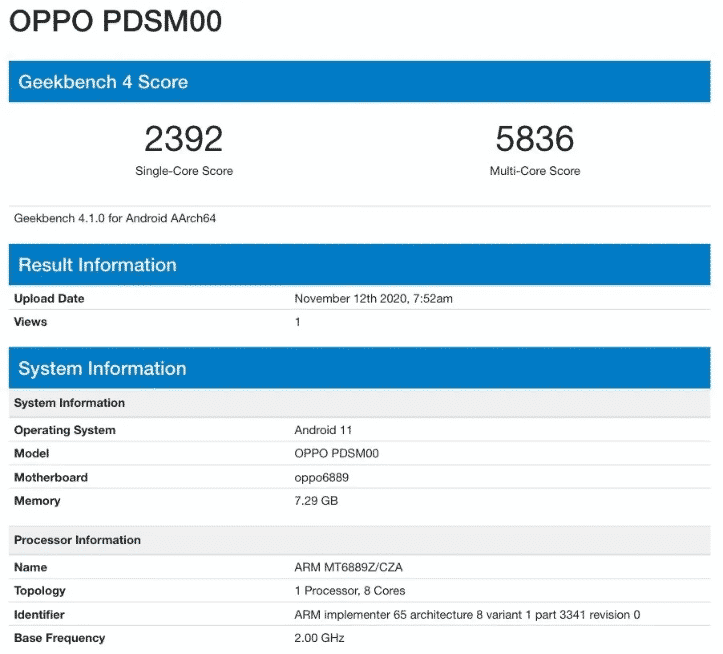 In the Single-core test, the device has scored 2392 points and managed to score 5836 points in the multi-core test. So, the Oppo PSDM00 (alleged Oppo Reno5 Pro) has managed to put an impressive benchmark result, which hints towards a high-end smartphone.

As per the Geekbench listing, the phone has 8GB of RAM and boots Android 11 out of the box. The chipset mentioned here has a model number MT6889Z/CVA which is the MediaTek Dimensity 1000+ SoC. So, this will be the first Oppo smartphone with Dimensity 1000+ SoC.

The model number PSDM00 looks similar to the Oppo PEGM00 which is speculated to be the Reno5. The Oppo PEGM00 was recently spotted on TENAA certification with a 6.43-inch display, 4300mAh battery, 65W fast charging, 32MP selfie camera, and 64MP quad rear cameras.