A new update has been released for Realme 5 and Realme 5s. The new update is being called January 2020 OTA update but brings the December 2019 security patch to the devices. The update comes with a software version RMX1911EX_11_A.23 over Android 9 Pie.

According to the software changelog, it brings the latest December 2019 Security Patch. The update addresses some of the major known bugs which were present in the previous build. The update also promised to improve the stability and performance of the system.

If you are confused between Realme 5 and 5s, let me clear it first. Both the devices are very similar in look and specifications. Realme 5s was released with a better camera. You can call the Realme 5s, a camera upgraded version of Realme 5. The Realme 5s has also started getting the same RMX1911EX_11_A.23 update just like the Realme 5. 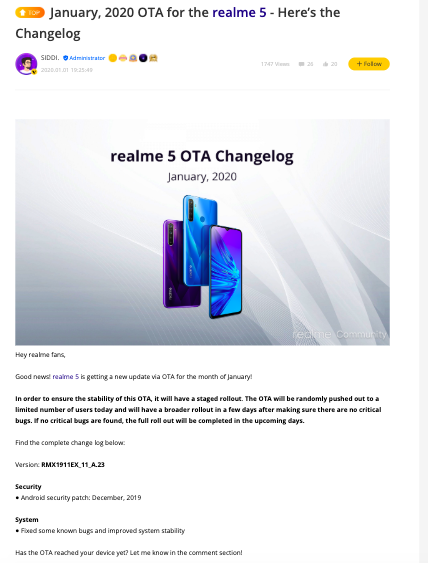 Meanwhile, you can check the OTA update on your device as the OTA is rolling out in an incremental way. So, it can take some time expectedly. Head over to the device Settings – Software update – Check for software update. Here we have additionally provided the firmware download link with installation steps if you don’t want to wait for OTA update.