It seems that more and more gaming smartphones are landing in the mobile market and we can in the gaming industry as well. While each and every smartphone OEM is trying to keep a couple of segments for its devices within a price range, some of the brands are working hard to deliver the ultimate gaming smartphones in a full beast mode. RedMagic is one of them and has come up with a new and improved gaming smartphone called RedMagic 5S. Those who’re looking for a great gaming handset with a full package can check out this RedMagic 5S Review.

Talking about the RedMagic, the brand is known for its ultimate gaming smartphones for a couple of years that offers unrivaled gaming experiences without any limits to its users. Back in 2018, the RedMagic brand has emerged as an individual company with its own sort of goals (Parent company, Nubia). Coming to the topic, the RedMagic 5S is now available for sale starting today that comes with an 8GB/128GB variant at $579 only for the Sonic Silver color. While the Blue & Red Pulse color option comes with a 12GB/256GB variant at $649 only.

RedMagic 5S Review: A true flagship at an upper mid-budget

The RedMagic 5S is a strong contender in the gaming smartphone market due to its key specifications and loads of advanced features. Whereas there are plenty of improved features, design changes, cooling technology, touch response, color contrast ratio, turbo-fan improvements, and most notable SDM865+X55M for its 5G connectivity, and more. So, without further ado, let’s take a brief look. The handset comes with a Metal Middle Frame + Glass Back Cover that gives it a perfect sleek, glossy look and at the same time, it feels sturdy on palms. It sports a 6.65″ Full-HD+ AMOLED display (1080×2340 pixels) with typical 600 nits maximum brightness level, TÜV Rheinland Certification low blue light for eye comfort, a 2.5D Corning Gorilla Glass protection, a 19.5:9 aspect ratio screen, and more. To be precise, the display features up to 144Hz refresh rate with up to 240Hz touch sampling rate apart from the 100% DCI-P3 Color Gamut & 100,000:1 typical contrast ratio. It’s equipped with a turbo-fan for faster cooling system that has a 56% increased cooling surface area than RedMagic 3S at a speed of 15,000 RPM. While there are some other useful cooling components available in this device such as a Liquid Cooling Pipe, a High Thermal Conductivity Copper Foil, Thermal Gel, a Cooling Graphite Thermal Pad, etc. 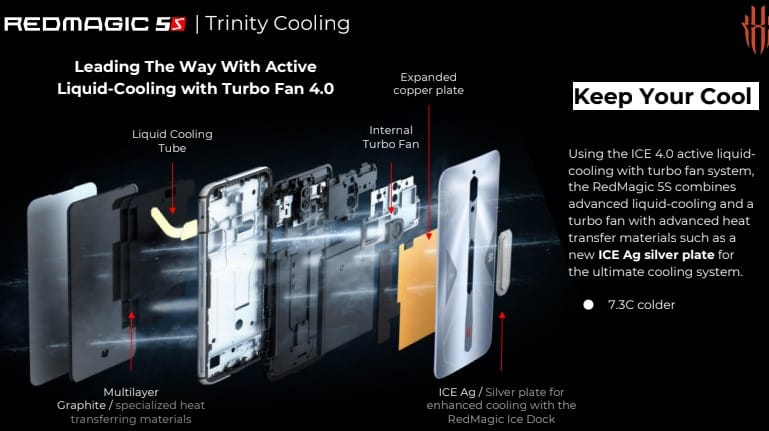 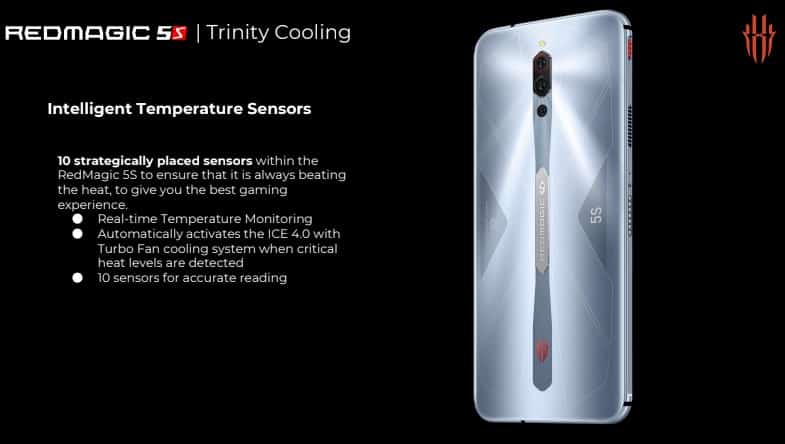 Now, coming to the processor and memory components, the device sports a flagship Qualcomm Snapdragon 865+X55M (octa-core) SoC, paired with Kryo 585 CPU Cores up to 2.84Ghz clock speed, Adreno 650 graphics. It has three RAM variants of 8GB/12GB/16GB and two storage variants of 128GB/256GB UFS3.1 out-of-the-box. However, according to the RedMagic, the actual memory size may be less and varies depending on multiple scenarios. It runs on Red Magic OS V3.5 based on Android 10 preloaded and enables GPU BOOST feature as well. 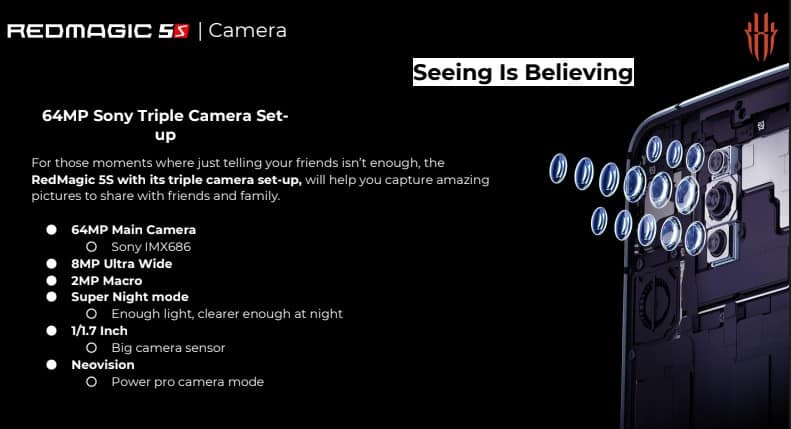 The handset bumps up a 4,500mAh battery with the 18W fast charging support. However, the interested users can buy a 55W PD Quick Charger separately to charge your RedMagic 5S at a blazing fast speed. Now, coming to the special functions or additional features, this gaming smartphone has shoulder trigger buttons that offer a 320Hz touch sampling rate, dual pressure touch buttons. Whereas the RGB Lighting effects are fully customizable according to the mood or gaming ambiance. There is an additional 3.5mm internet port called Magic Adapter. During gameplay or multimedia consumption, users can also use the multitasking feature using the Picture in Picture 4.0 mode. Talking about the Gaming Hub, it offers 144Hz refresh rate, chooses Turbo Fan speed, set up shoulder triggers, activate 4D Shock for vibrations, review & analysis your gameplay sessions in Personal Center, etc.

Overall the RedMagic 5S is an ultimate gaming smartphone that not only comes under a half-price tag than other flagship gaming devices but also offers so many features that you can’t find on others. In a single line, it’s a true gaming beast that doesn’t compromise with its specifications or features or even additional functionalities.