Have you been looking for a viable screen recording software but not been able to come across the perfect option yet? If so, then the iTop Screen Recorder from iTop is just what you need. This is a user-friendly screen recording software for your Windows PC. It has got a highly intuitive user interface and anyone can use it for recording their screen without prior experience. The iTop Screen Recorder is a versatile software that allows you to record screen, audio, voice, and gameplay. You can even capture your webcam video alongside the screen video.

The iTop Screen Recorder is a feature-rich screen recorder and it comes with a number of exciting options for recording your screen. Here are some of the key features of this software that you should know about.

You will be able to record the screen at high resolution without any issues or lag. Starting from full screen to a specific window or region, you’ll be able to customize the recording area depending on your requirements. You can even capture screenshots when needed. The software will allow you to capture video at 1080p and 120 FPS.

The iTop Screen Recorder is equally suitable if you want to record your gameplay. You can play game sounds and add your live commentary through the external mic. Besides, you’ll also be able to add a webcam video for showing your live reaction.

If you’re looking for the premium version, you’ll be able to schedule recording such that the software automatically starts recording the screen in your absence. It’ll automatically end the recording depending on the duration set and then save the file for your viewing once you come back.

The iTop Screen Recorder features an in-built video editor where you’ll be able to add stickers, video filters, and images from your PC to your recording. You can even add background music and subtitles. Moreover, you’ll be able to trim the video and export it before saving it to your computer.

You can also show mouse clicks while enabling hardware acceleration. You can also change the video settings, starting from the resolution, frame rate, bit rate, and file format. Moreover, you’ll be able to set hotkeys for easy operation having key combinations. The software will support over 12 file formats such that you can play the recordings on different devices.

How to use the screen recording and editing features?

The iTop Screen Recorder will be able to record up to 4K resolution in 120 FPS without any issues or lag. Whether you’re recording games, music, or videos, the recordings will turn out to be smooth as well as the computer audio. Maxing the settings at 4K 90 Frames could produce slightly sluggish videos. When you’re using multiple programs or running high-end games, the frame rate of the screen recording could be affected. With that said, it seems like the software was developed with keeping gamers, musicians, or high-end software users in mind.

The software will also include an option for saving an extra audio file when recording. This is a useful feature, especially for streamers and content creators. In any case, if you’re having to use or process audio from the screencast, you could. 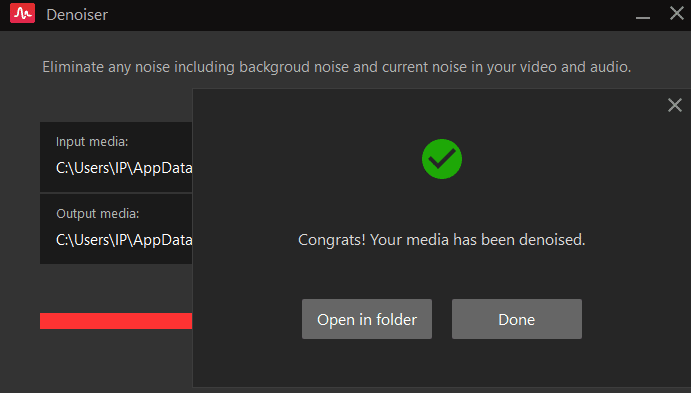 Interestingly, there is even a built-in denoising tool to denoise audio files within a few clicks. Further, there is no way of adjusting the denoising effect level. If you’re a music producer or involved in music in any way, this could feel a bit limiting. Lastly, the screen recorder will support over 12 video and audio formats from MP4, MP3, MOV, AVI, and more. Exporting the video is pretty quick as well, although the speed will depend on the onboard CPU and graphics card. While editing videos with a heavy editor like Premiere Pro is well and good, sometimes, a simple video editor is all that you require. The iTop Screen Recorder also includes a video editor, which you’ll find to be incredibly useful. The interface with this one is very simple and straightforward. Alongside the fundamental video editing functions like slicing, trimming, and changing the speed of the video to adding more audio text, you will be able to add text, watermark, create transitions, and effects all within the video editor.

How to download and use the iTop Screen Recorder?

The iTop Screen Recorder is only available for Windows users. However, you can even go for the free option but you need to be aware of the limitations. First, the free version of the software will put a watermark on your recording. The file formats are rather limited and the schedule recording feature isn’t available. Moreover, the recording quality will be lowered in the free version. To get over such limitations, you could go for the premium version. Here are the instructions to download and use the iTop Screen Recorder.