The upcoming Samsung Galaxy F41 has recently been spotted on BIS certification site of India which reaffirms the India launch of the device.

The Samsung Galaxy F41 will be the first phone under Galaxy F-series, which features camera-centric affordable devices. The F-series smartphones are expected to be priced between Rs 15,000 to Rs 30,000. Recently, the Galaxy F41 was spotted in Google Play Console listing with some key specifications.

As per the listing, the Galaxy F41 will feature Exynos 9611 chipset paired with Mali G72 GPU. The handset runs Android 10 and comes with 6GB of RAM. The display has a resolution of 1080×2340 pixels and 420 DPI pixel density. There is also an image in the Play Store listing which looks much similar to the Galaxy M31. 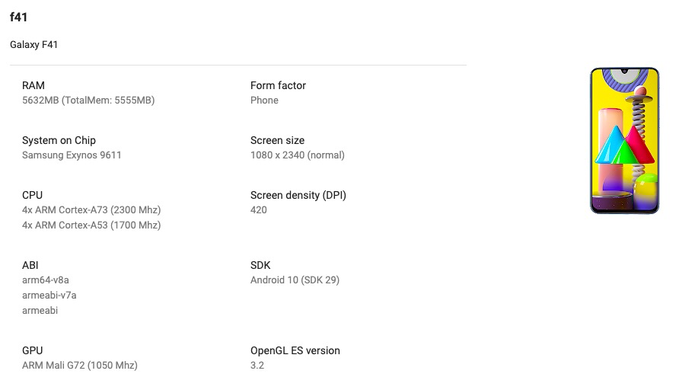 Ahead of the launch, a user manual of the phone posted was recently posted on Samsung’s India support page with schematic diagrams revealing the design.

In the above images, we can see the F41 will have a waterdrop notch to house the selfie camera, and the bezels are thick at the bottom. The rear side schematic reveals a rectangular-shaped triple camera setup and a rear-side fingerprint scanner. At the bottom, it has a microphone, speaker grille, a USB Type-C port, and a headphone jack.

Further, the manual reveals a wide and ultrawide camera, but the megapixels count is unknown. It also mentions fast charging support without revealing charging speed. The Samsung Galaxy F41 has a triple-card slot, which means a dual-sim slot and a microSD card slot.