So, the Galaxy A42 has a 6.6-inch super AMOLED Infinity-U display with HD+ resolution and an in-display fingerprint scanner. It is powered by an octa-core processor that consists of two 2.2GHz cores and six 1.8GHz cores. The phone comes in three storage variants – 4GB + 128GB, 6GB + 128GB, and 8GB + 128GB. There’s also a MicroSD slot that allows storage expansion up to 1TB. 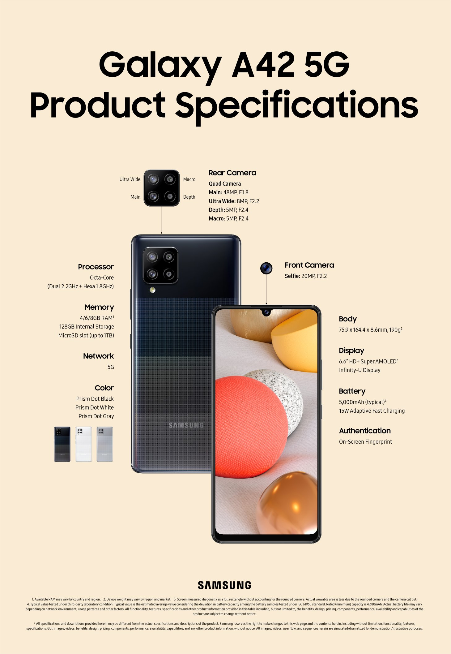 Around the back, we have a quad camera setup that includes a 48MP primary camera, an 8MP ultrawide lens, a 5MP macro, and a 5MP depth sensor. For front photography, the phone is equipped with a 20MP selfie camera. A 5,000mAh battery fuels the device that supports 15W fast charging.

The device will be offered in Prism Dot Black, Prism Dot White, and Prism Dot Gray colors. Samsung is yet to reveal the price and release date of the Galaxy A42 5G. Since the specs are officially out, we think the release is too near.