Home > How To > How to Unlock bootloader of Oneplus 3

Guide: How to Unlock bootloader of Oneplus 3 (Full Step By Step tutorial): OnePlus released OnePlus 3 on June 14th, 2016 in a VR event.This is the flagship phone from OnePlus.The device comes with all the high-end features and specification.The OnePlus 3 has a snapdragon 820 CPU coupled with 6GB of RAM and 64 GB internal storage with no memory expansion.It comes with latest Android 6.0.1 Marshmallow out of the box.The device is powered by a 3000mAh battery.It has a 5.5 inch 1080p AMOLED FHD Screen.It sports a 16MP rear and 8MP front facing cameras.The camera is also capable of taking 4K videos.The price of the phone is 399$ .Truly this is the latest “Flagship Killer”.

If you want to root any android device or install recovery or ROM then you have to Unlock bootloader of that device first.This is the first step in rooting android.But Remember when you unlock your bootloader, your device’s warranty will void.

rootmygalaxy.net will not be held responsible for any kind of damage occurred to your OnePlus 3 while following this tutorial.Do it at your own risk.

->Install USB Driver for OnePlus 3  On your PC->Usb Drivers

How To Unlock bootloader of Oneplus 3 (SAFEST GUIDE) 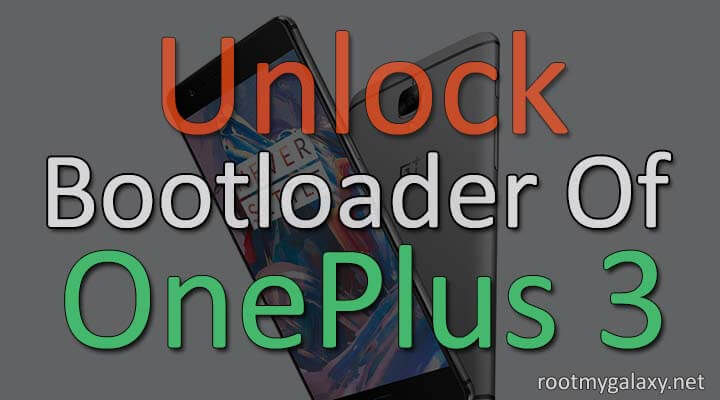 [symple_box color=”gray” fade_in=”false” float=”center” text_align=”left” width=””] Bootloader Mode: Switch off your OnePlus 2 and after waiting for 3-4 seconds after screen goes off. Press the Volume Up Button + Power button together until you see anything on the screen. Now your phone is in the fastboot mode[/symple_box]