In this guide, you will learn How to safely Update Samsung Galaxy E7 To Stock E700HXXU1BOJ7 Lollipop 5.1.1  Firmware.Samsung has started rolling out official Android 5.1.1 lollipop updates for it’s mid range devices which are previously running android KitKat and Samsung Galaxy E7 SM-E700H is one of those devices.

Samsung Galaxy E7 is a mid-range Samsung devices launched last year.The phone features some mid-range specs.It has decent price tag so the phone became very popular and there are many people who are using this device as their daily driver.

This Android Lollipop Update For Samsung Galaxy E7 comes with build number E700HXXU1BOJ7 and will be available via OTA (Over the air).But in order to update via OTA, your device should be locked.But if you want to update to this official stock Android 5.1.1 lollipop firmware right now or if your device is rooted then don’t worry this guide will help you to manually Update Samsung Galaxy E7 To Stock E700HXXU1BOJ7 Lollipop 5.1.1

rootmygalaxy.net will not be held responsible for any kind of damage occurred to your Samsung Galaxy E7 while following this tutorial.Do it at your own risk.

Before you begin the flashing process, first download Galaxy USB drivers on your computer, then enable USB debugging on your Galaxy Note 4 smartphone, go to settings >> developers option. If developer’s option isn’t visible on your galaxy device, simply go to about phoneunder settings and scroll down to build number, then tap build number up to 7 times to make developers option visible. 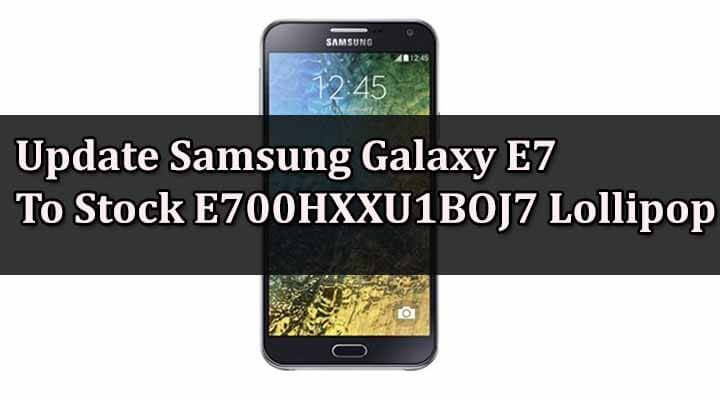