Samsung Galaxy Note 7 fiasco is the worst thing that ever happened to Samsung and the company has been trying to avoid the incident and the company has successfully managed to divert the attention of the customers to its recently launched phones which are the Samsung Galaxy S8 and S8+. Samsung is also planning to launch the Note 8 later this year for its Note series but the company is now launching the refurbished version of the Galaxy Note 7 which were exploding all of a sudden. The company had investigated for the reasons and found that the battery on the devices were to blame for that incident. Samsung also recalled the original Note 7 for safety concerns and offered a full refund to its customers as well.

As per the Geekbench listing, Samsung will endow refurbished Galaxy Note 7 with 4GB RAM, which was anticipated as the original model had the same memory capacity paired with 64GB native storage. So although Geekbench doesn’t mention the ROM, it is highly likely that even the refurbished Note 7 models will retain the 64GB capacity.

Also known is that the second specification revealed by Geekbench is its SoC. The Galaxy Note 7R will be powered by octa-core Exynos 8890 processor clocked at 1.59GHz which also powered the original Note 7. 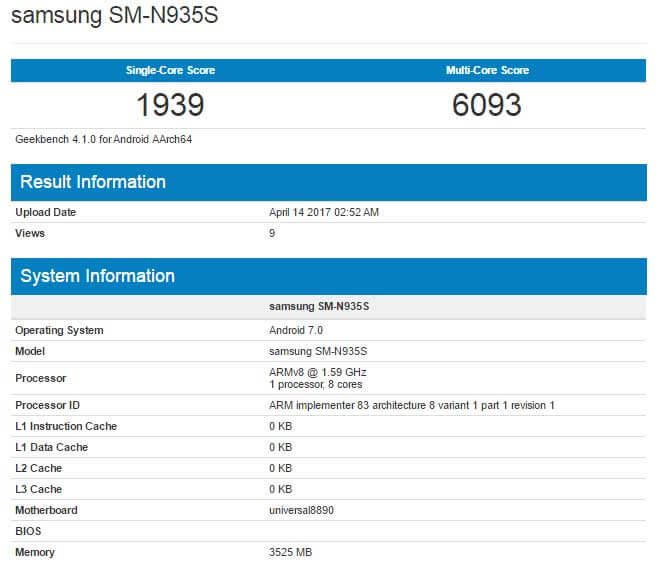 However, another Geekbench listing of the refurbished Note 7 shows Exynos 8895 processor. Now this is something which caught us unawares as it leads to rumours that Samsung might equip the Note 7R with Exynos 8895, the one that powers the Galaxy S8

Also, keep in mind that the Samsung Galaxy Note 7 will have a price around $250 less than the original Note 7 which makes it the best buy at such a low price and such good specs and the decision for Samsung to launch the Note 7R ahead of Note 8 is very confusing, to say the least.

Sprint releases the April security patches to the Galaxy S7 and S7 Edge.