Samsung has been building up some reputation for the company recently after the Note 7 debacle of last year. Samsung recently launched the Samsung Galaxy S8 and S8 in US as well as the Indian markets. The users of the Galaxy S8 and the S8+ were reporting that their devices have a strange red-tint on their devices which is more than normal. Samsung was quick to acknowledge this defect and the company released the update to the devices just yesterday which is very quick. The company has also not forgotten about the other phones in its lineup as well and now Samsung has been sending some updates to the Samsung Galaxy Note 5 and Samsung Galaxy S6 Edge Plus which were released in 2015.

Galaxy Note 5 and S6 Edge Plus units on Verizon are now receiving a new firmware update. This update installs April security patch and is being rolled out over the air as we speak. The new firmware arrives as build number N920VVRS3CQD1 to Galaxy Note 5 while Galaxy S6 Edge Plus is receiving the update as build number G928VVRS3CQD1. Other than the monthly security patch, the update also tags along with it regular bug fixes and system improvements. 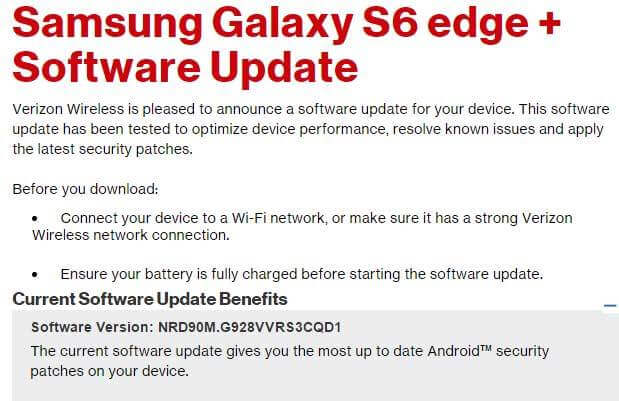 As for the Samsung Galaxy S6 Edge, the screenshot of the Verizon post has been shared above which states that the update has been released for the device and the update comes with the latest security patches which is not May but April. Nevertheless it is also a big security patch and the May security patch will also come soon. You can also check the update yourself by heading to Settings > About device > System updates. If you find the update sitting there, be sure to complete two other rituals steps before hitting the download button. First, charge your handset fully and second connect it to a WiFi network. This will ensure seamless installation of the firmware update.