The Chinese smartphone OEM Meizu has now finally entered into the Android 10 lineup by pushing the Flyme OS 8.1 Internal Beta Recruitment for a couple of Meizu devices. It’s worth mentioning that the Meizu 16/17 series devices, Meizu Note8/9, and Meizu X8 models are on the list. Additionally, there are more devices added to the list like Meizu 17 and 17 Pro, etc.

Meizu has shared the particular information on its community forum as well as on Weibo as well. According to the announcement, Meizu says “Flyme based on Android 10 is now undergoing internal beta recruitment, and the first internal beta version was officially launched on July 21. In addition to the Meizu 17 series, 10 models will be adapted. More surprises are unlocked one after another.”

Now, talking about the Internal beta recruitment program, the OEM has mentioned that the beta registration process will start from June 23, 2020, until July 31, 2020. Now, all the Meizu device users those who have eagerly waited to get the list of compatible devices for the Android 10 update, should start rejoicing as we’ve mentioned all the eligible device list below. 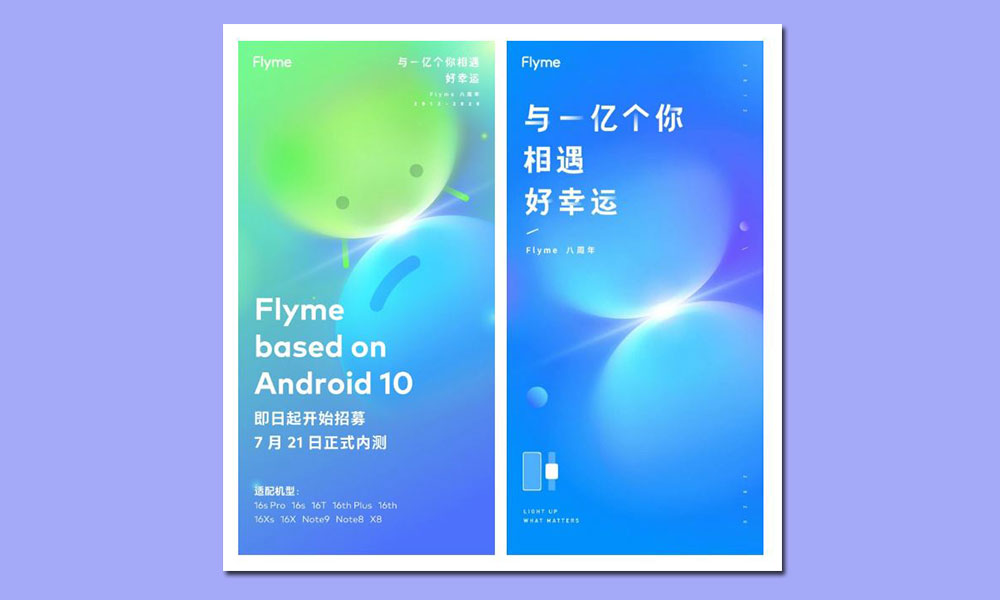 Whereas the Flyme OS 8.1 (Android 10) internal beta update will also be applicable for the Meizu 16s Pro, Meizu 16th and 16th Plus from July 21, 2020. While the Meizu 16T, Meizu 16X/16Xs, Meizu Note8/9, Meizu X8 models will start receiving the update by the end of July 2020 onwards. Currently, the beta recruitment program is live in the China region only.

All the eligible and interested Meizu device users can apply for the Android 10 beta recruitment program by heading over to the Settings -> System Update -> Android 10 Internal Test Recruitment. Next, follow all the on-screen instructions to apply for the beta program.

Keep in mind that the internal beta will have some bugs or stability issues in its early builds. So, users should understand what they’re doing and make sure to take a full data backup of the device as well.