The Huawei Y9 (2019) model was released back in October 2018 which is also known as Huawei Enjoy 9 Plus in China. It came with Android 8.1 Oreo over EMUI 8.2 and currently, it’s running on Android 9 Pie. Meanwhile, some of the users are eagerly waiting for the latest Android 10 update which didn’t seem possible earlier. But now, the company has confirmed that Huawei Y9 2019 is going to get Android 10 (EMUI 10) update officially.

Previously, according to the official Huawei India Twitter handle, the Huawei Y9 (2019) model wasn’t capable of receiving the latest EMUI 10 updates which are based on Android 10 due to its hardware limitations. As the Android 10 requires higher hardware specifications for optimal performance. Huawei India has officially replied to a curious Huawei Y9 (2019) user on Twitter who wanted to know when the EMUI 10 update will arrive for Huawei Y9 2019 variant.

Meanwhile, owners aren’t happy at all with that news. But so many frustrated Huawei Y9 2019 users have signed the petition on change.org website to provide the Android Q update to Huawei Y9 2019 model. And guess what! Huawei has responded quickly and has confirmed that the latest EMUI 10 update based on Android 10 that will arrive on Huawei Y9 (2019) model officially. You can check the Tweet here. The device will receive the update very soon expectedly. 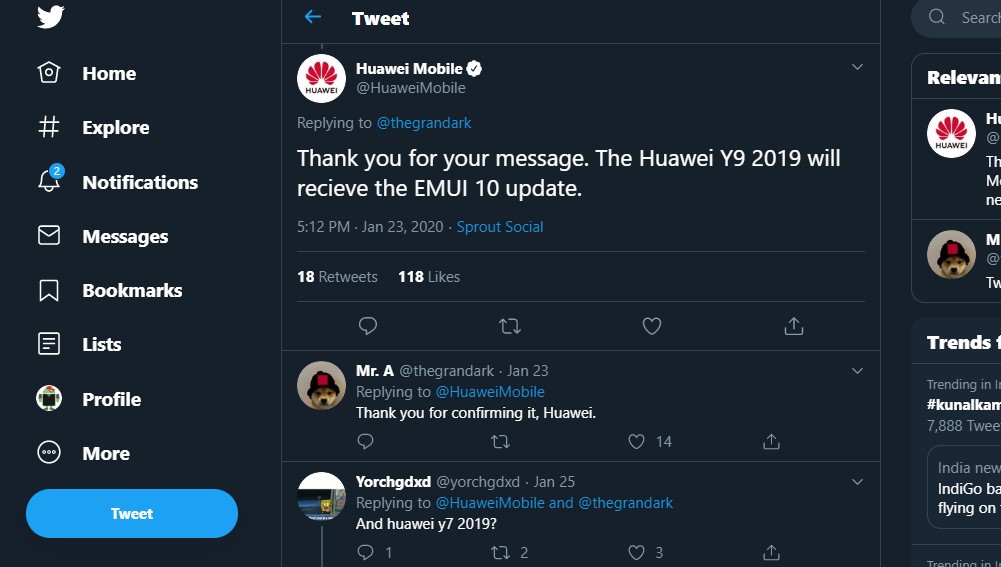