Here we share The Ultimate List Of Best Custom ROMs For HTC One M9.You can Flash all of these ROMs via latest TWRP recovery or another custom recovery.It will change the look and feel of your Htc One M9.

Htc One M9 Code-named Hima is the Flagship phone of 2015 from Htc.It is the successor to the last year’s Flagship HTC One M8.It comes with a 5″ SuperLCD3 1920 x 1080 display, 32GB internal storage, with up to 128GB available via microSD. It is powered by a 64-bit 2GHz octa-core Qualcomm Snapdragon 810 processor and 3GB of RAM.The M9 rear shooter has a 20.7MP sensor, with dual flash and 4K video at 30fps and the Front facing camera, has a 4UP sensor.It has an average2840mAh battery.

If you are not happy with your Htc Sense User interface or with the Stock ROM, you can flash any of this customROM on your device.Don’t worry will be sharing all the details about these ROMs and Flashing guide.

Remember these are the first release of the ROMs, so there will be a new release or few bugs will be present in the initial build.Before downloading and Flashing the ROMs check their Official page.Don’t worry everything will be listed below.These are our top 5 Best Custom ROMs For HTC One M9.

The ROM is a very well balanced ROM with great performance and stability.It is a pre-rooted ROM and comes with almost no bloatware.It has Aroma installer.The battery life is better than stock Firmware.It is based On Htc Sense.

Some features of this Rom:

→ Read more about this Rom from here.

This is a highly customizable ROM for Htc One M9.It is one of the most popular ROM for Htc devices.the battery life is decent and the ROM is very stable. 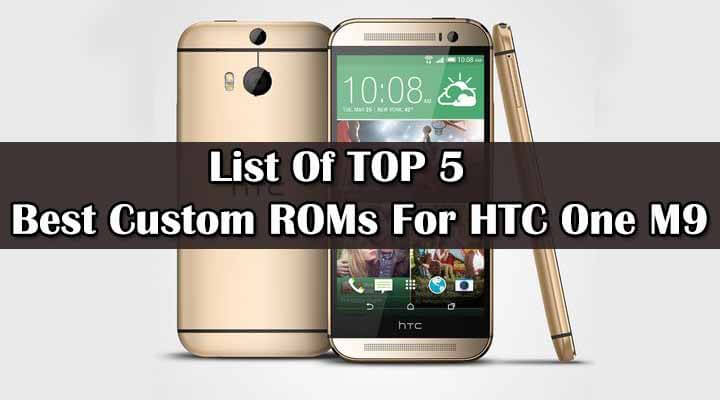 Team Venom has developed this awesome ROM.It comes with a great performance along with loads of inbuilt features, apps and settings.It has a great support which makes it different from other ROM listed here.New themes, tweaks, settings, User Interface, file manager are included in this new built

If you want a ROM with great battery life then this is the ROM to go with.It has the best battery life among all the listed ROMs.It is also a very stable ROM and the Performence is top notch.It is a pre-rooted ROM.

It is a stock Android Lollipop firmware based light-weight Rom.It comes with many useful added tweaks.The Performance and stability of the ROM is great.It has 600pre-loaded fonts for customization which makes it different from other ROMs.

These are our Top 5 Best Custom ROMs For HTC One M9.Which ROM you are using on your M9 and which is your favorite?? Let us know in the comment section below