Recently the full specifications of Realme C11 were revealed @Sudhanshu1414. The device has also been spotted in various certification sites like NBTC.

Today we spotted the device on Geekbench. The Realme C11 with model number RMX2185 was benchmarked on the popular benchmarking platform Geekbench.

As per the Geekbench listing, the device is being driven by MediaTek’s MT6765V/CB SoC with a base frequency of 2.30Ghz coupled with 2 GB of RAM and It runs Android 10 mobile Os.

Now coming to the Geekbench score, the device has scored 900 points in the single-core test and 4153 points in the multicore test. 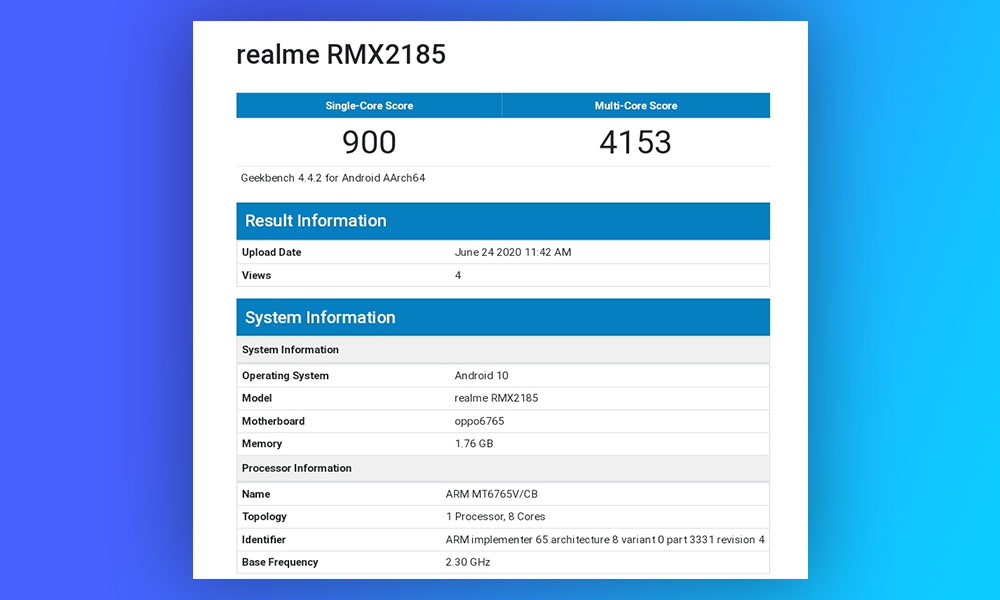 As I have mentioned above, the full specification of the device has been revealed by Sudhanshu on twitter. According to Sudhanshu, The device will be powered by Helio G35 Gaming Processor. It will feature a6.5″ Mini-drop Fullscreen display.

There will be 13MP AI Dual Camera with Super Nightscape feature. The device will be backed by a humongous 5000mAh Battery. The device will have 2GB RAM and 32GB internal storage with a dedicated microSD card (No hybrid) slot for further storage expansion. The device is all set to release on June 30.