Today, a mysterious Vivo smartphone with model number V2037 has appeared on Geekbench. The listing reveals some key specs which suggest that it is likely a mid-ranger from Vivo.

As per the Geekbench listing, Vivo V2037 is powered by MediaTek Helio G80 chipset. The 4GB RAM variant was tested on Geekbench, but we expect more variants. The Vivo V2037 boots Android 11 OS out of the box. 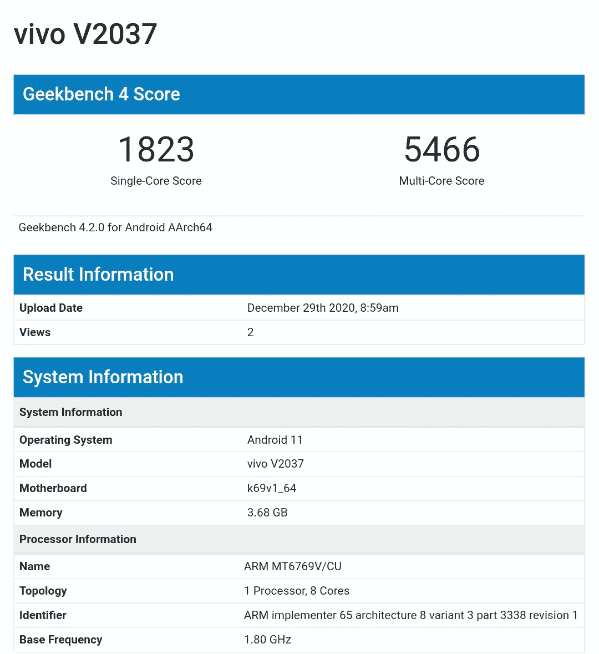 As of now, that’s all pretty much details out there. But, we expect to hear more about this Helio G80 powered Vivo phone very soon. In addition to this, Vivo is gearing up to launch its flagship X60 series. The X60 and X60 Pro will be the first phone to feature Exynos 1080 chipset. Read more about the Vivo X60 here.

[via]
rootmygalaxy.net is one of the leading tech blogs started in 2014. Our stories have been picked up by the likes of Forbes, Foxnews, Gizmodo, TechCrunch, Engadget, The Verge, GSMAreana, and many others. Want to know more about us? Head here. You can follow us on Telegram, Twitter, Instagram and Facebook
Facebook0Tweet0Pin0Email0