A ZTE smartphone with model number Z5157Y spotted in Geekbench database. It is believed to be the ZTE Blade A3v. According to the listing, the device runs Android 10 having 2GB of RAM. The phone is equipped with a quad-core MediaTek Helio A22 processor with a base frequency of 2.0GHz. In the Geekbench benchmark test, the device has scored 102 points in the single-core test and 215 points in the multi-core test. 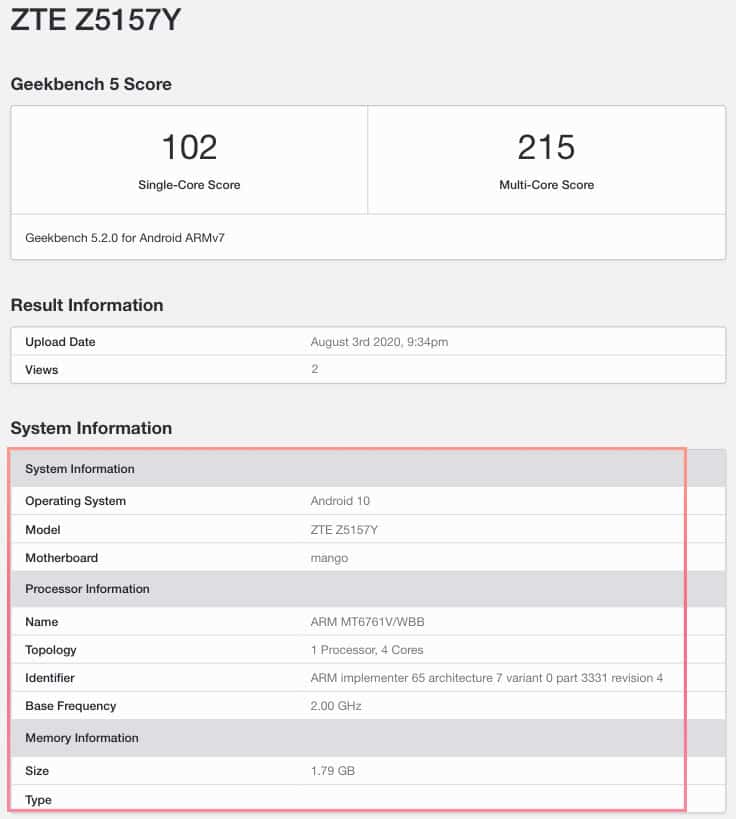 The phone was earlier found in Google Play listing revealing some key specifications. Google Play listing also confirms the phone to have 2GB RAM, MediaTek Helio A22 chipset and Android 10, we just saw in Geekbench listing. Along with this, the play store listing also confirms the phone to have 720 × 1440 pixel resolution and 320 dpi pixel density. The specs sheet is quite similar to the Blade A3 Prime launched on Yahoo Mobile priced at $99 (roughly Rs 7,500).

Apart from the GeekBench and Google Play listing, ZTE Blade A3v also appeared on FCC and Bluetooth SIG certification. This indicates the launch date is not too far from here, and we may hear some update from ZTE soon.

Most of the device with 2GB of RAM has base storage of 16GB and we also expect the same here. We may see some other variants too probably a 2GB RAM with 32GB internal storage and 3GB RAM with 32GB storage. It will be a budget phone with the price expected to be under Rs 10,000 ($135).