Motorola has come a long way in developing competitively priced and affordable smartphones since the launch of their First Generation Moto G, in 2013 .The newest offering, from Motorola owned by Lenovo , the Moto G4, and G4 Plus launched on 17th May 2016, comes with better specs than its predecessor , proving once again that Motorola is a strong competitor among the other big brands.

Let’s take a quick look at what it has to offer.

In terms of design and display , the Moto G4 Plus is a really slim device. The front panel has a 5.5-inch Full HD display.and is protected with ‘ corning gorilla glass 3’ . The newest feature to be noted is the fingerprint sensor.

Moto G4 Plus comes with an octa-core chip with 3GB of RAM. It runs on Marshmallow and comes with 32 GB of internal storage which can be expanded up to 128GB with the help of a ‘microSD ‘card.
It has a 16 -megapixel (MP) primary and 5 MP secondary camera .

[icon name=”arrow-circle-o-right” class=”” unprefixed_class=””] All the above mentioned specifications makes the Moto G4 series, a value-for-money smartphone. But increasingly more and more owners have been complaining about the overheating and excessive battery drain of the device. 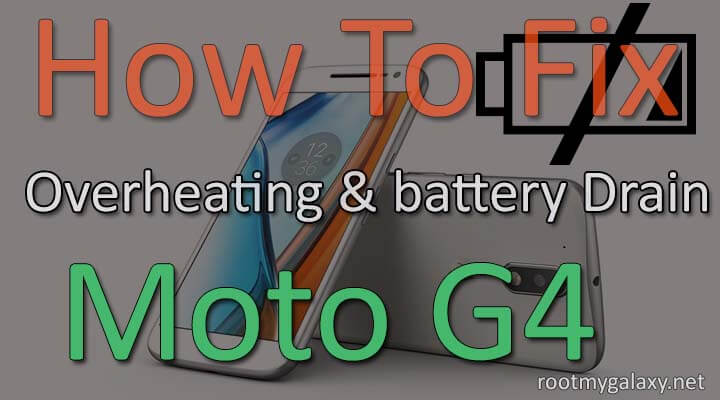 This is a very basic fix. All you need to do is turn off the automatic brightness feature and set the brightness to a lower setting manually (not so dim that the screen can hardly be seen ). Turning the display brightness down is an effective way to increase the Moto G4’s battery life.

Since the Moto G runs on the latest android updated , marshmallow, its memory optimization will make the device last longer. But if their instances of a battery drain it may be due to unwanted or unnecessary apps running. Uninstalling these apps can help conserve the battery life

4)Too Many Apps Running

Due to too many apps running in the background, some of which might even start running as soon as the phone is switched on can cause unexpected heating of the device. Uninstalling a few of these apps can reduce the over-heating.

Watching videos and other media content is one of the things that can make the device to overheat, combining a load of playing a video with a load of a data connection when streaming content along with other processes running in the background over time the phone might start to get a little warm to the point of overheating.

There is a wide selection of exciting and fun games available in the Android App store , each game has different in terms of processing power. Some of these games may use more power , and might require the user to have a data connection , that is the device will have to maintain an active internet , along with lengthy usage might cause things to heat up.

If your battery is defective or malfunctioning, cause of manufacturing defects. It can add to the overheating of the device.You may replace the device for a new one if it’s still under the warranty period

Exposure to water, or moisture, can add to the battery drain and overheat of the phone

If the user has customized or manipulated any software on the device to run faster or differently , may have caused the battery to heat up. Overheating of the battery due to this manipulation can result in shorter lifespan and damage to the hardware of the device

As Androids get used, apps and processes can start to run and continue to run until the user disables the process, or the device reboots but being constantly powered on can also cause minor software problems, which may cause the app to use more power than necessary(overclocking) . Disabling these apps will help you get a few more hours of precious battery life

This factor does not contribute much to the overheating of the device, but updated software can help a cell phone run smoother and can cause less strain on your phone and might help to lower its average temperature.
All the above fixes serve as an effective way of increasing the battery life of the Moto G series, but ultimately if the problem is with the device due to manufacturing defects, it’s easier to trade in your defective set for a new one if it’s under the warranty period.