Honor V40 is expected to be the company’s first flagship smartphone after getting separated from Huawei. Recently, the smartphone was spotted on Chinese 3C certification with 66W fast charging. Today, an alleged render of Honor V40 surfaced on the internet that reveals its front and rear design. 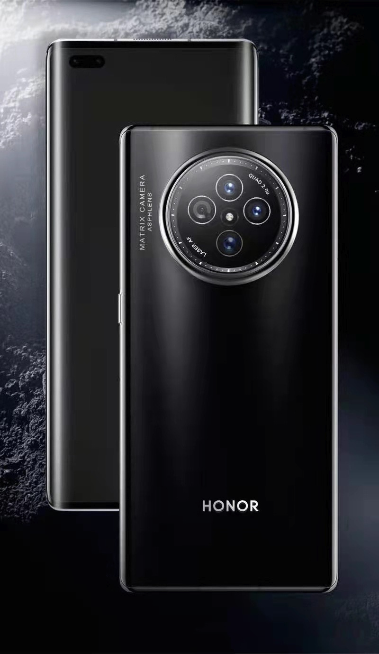 On the back, we see a quad-camera setup, where 3 sensors are large ones and one being small. The camera module design seems to be inspired by watches. To the left of the camera module, there is some text which reads “MATRIX CAMERA ASPHLENS”. The ASPH Lens (or Aspheric Lens) is also used by LEICA, which Huawei uses in most of their flagships.

The front side features a curved display that has a pill-shaped cutout for the dual selfie camera. The earpiece portion can be seen at the top. Along with this render, a sketch (shown above) of the smartphone is also spotted, which reveals that the display is curved by 88 degrees. It also reveals bottom portion of the smartphone which houses a sim-tray, a microphone, speaker grille, and a charging port. The size of pill-shaped cut-out on the front is also decreased by 20 percent.

The Honor V40 is likely to feature an FHD+ display with a 120Hz refresh rate. It is likely to be powered by MediaTek Dimensity 1000+ chipset and may feature a 50-megapixel primary sensor.