After releasing the Huawei Mate 30 Pro in September 2019, the Chinese tech giant is working on its upcoming flagship smartphone called Huawei Mate 40 Pro. Recently, a new smartphone design patent filed by Huawei with German patent agency DPMA. This shows a smartphone design that has a circular Penta camera lens on the rear side. While the front has a triple selfie sensor cutout. Though it’s not yet clear whether the handset will feature three front cameras or not.

It’s expected that there will be a dual selfie camera setup along with an LED flash or it can triple cameras with a TOF 3D camera as well. We have to wait for more leaks and reports to confirm it. Meanwhile, the device has quite visible antenna bands that may be improved call connectivity or network speed. Whereas, it’s also expected that the device will feature 5G connectivity for sure. The display has a wider notch for the earpiece, cameras, and other sensors that looks decent. 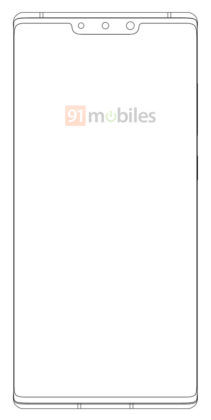