2020 is heading towards an end, but smartphone companies are not done yet launching new products for the current year. Plenty of smartphones to come by the end of this year which include Nova 8 series, Huawei Enjoy 20 SE, Xiaomi Mi 11 series, IQOO U3. Now Vivo joins the list by sharing a poster on Weibo that confirms its X60 series launch happening on December 29. 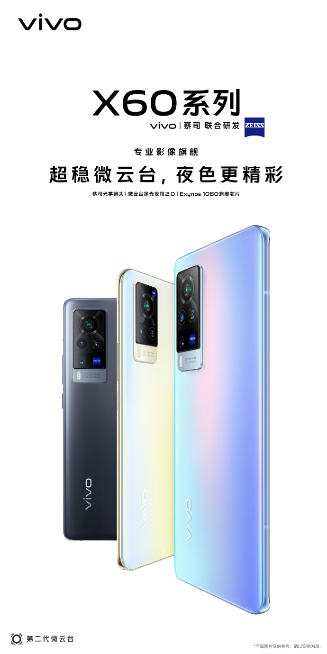 The poster teases the rear side design and quite a few interesting specs. The camera setup for X60 series is being developed in partnership with ZEISS. Vivo X60 series phones will feature Ultra-Stable Micro-Head Camera sensor, micro-panel blacklight night vision 2.0., and Zeiss optical lenses.

The upcoming Vivo X60 series is probably the last phones of 2020 and the first to feature Samsung’s 5nm Exynos 1080 chipset. Interestingly, the handsets will run Vivo’s new Origin OS out of the box.

Like the X50 series, Vivo may announced three smartpones under the X60 series too. The phones are expected to feature a 120Hz display with a punch-hole cutout for the selfie camera. The poster shared by Vivo reveals that the device has a quad-camera setup and comes in three gradient colors.