This guide will teach you How to Download & Flash / Install CM13 Marshmallow ROM On Sony Xperia Z1 C6902 L39h (Codenamed Honami) Android 6.0.1.You just have to download the Unofficial CyanogenMod 13 a.k.a CM13 ROM from the given link and then flash it via TWRP Recovery.Step by step guide to Update Sony Xperia Z1 to Android 6.01 Marshmallow Via CyanogenMod 13 (CM13) is given below.

If you are an owner of Xperia Z1, then it’s time to update it to Android Marshmallow 6.0.1. Now there is an Unofficial but functional CyanogenMod 13 a.k.a CM13 ROM available for the device.The ROM is shared By drakonizer, Senior Member over Xda.These are UNOFFICIAL CyanogenMod builds built using the UBER-Toolchain.

As i mentioned before, it is an unofficial ROM.The ROM is functional but there are few bugs present as of now as it is in its alpha stage.But we are sure in future update everything will be fixed.For Bugs list and more info on this ROM, check out this official Xda Post.Follow the guide carefully to Flash / Install CM13 Marshmallow ROM On Sony Xperia Z1

This CyanogenMod 13 ROM is not developed by team CM but based on their CM 13 source code and latest Android 6.0.1 Marshmallow.It is a very clean ROM with some extra useful features.You will also get smarter app management with advanced permissions control, Now On Tap, Adoptable Storage and the DOZE Mode resulting in good battery life.We will be sharing Full step by step guide to Flash / Install CM13 Marshmallow ROM On Sony Xperia Z1 (Unofficial)

Supported Devices: This guide is only for Sony Xperia Z1 C6902 L39h (Codenamed Honami). So don’t try on other Models

rootmygalaxy.net will not be held responsible for any kind of damage occurred to your Xperia Z1 while following this tutorial.Do it at your own risk. 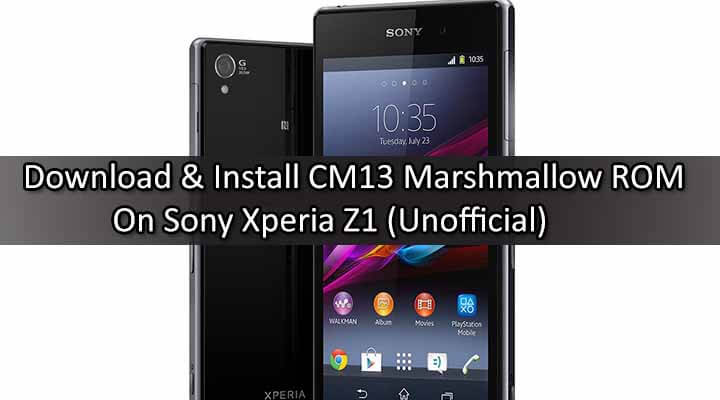