Samsung has started rolling out the latest November 2017 security patch OTA Update For Galaxy A7 SM-A720F (2017) in India.The update is based on Android 7.0 Nougat.The latest security update comes with build number A720FXXU2BQK2 and the update will be available very soon across the country.The update brings loads of bug fixes and system improvements. The A720FXXU2BQK2 November 2017 security patch OTA Update weighs in around 330MB so you need a working internet connection to download the update.

Samsung has been pushing out the latest November security patch for many latest Galaxy devices including Galaxy S8 series and Note 8.This is not a major update but has Google’s latest Security Patch so we recommend users to Download/Install Galaxy A7 (2017) A720FXXU2BQK2 November 2017 security patch OTA Update.The users who have received and installed these updates have had their devices upgraded to Android 7.0 Nougat firmware. This update not only comes with the latest security patch, but it will also come with =several bug fixes, performance and Stability improvements.

If you are a Galaxy A7 (2017) user who has not yet received the official OTA update and are willing to download it manually, then this post will be really beneficial to you. In this post, we will give you the details on how you can easily download and install Galaxy A7  (A720F) A720FXXU2BQK2 November 2017 security patch OTA Update 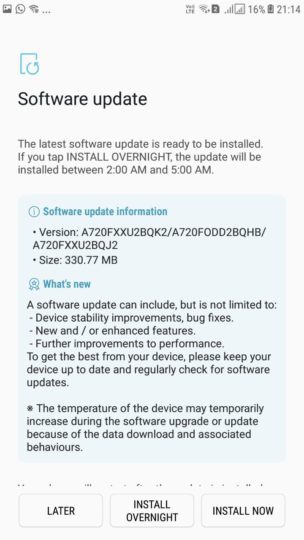 First, download the A720FXXU2BQK2 firmware file following the above guide, then follow the linked guide below to Install Security Patch Update On Galaxy A7 SM-A720F (2017) using Odin Flash Tool