“GApps” is an unofficial package distributed in several forms and places containing Google applications and frameworks. It is not a ROM. You don’t have to install GAPPS, but many users may wish to do so in order to access Google Play store and some applications that depend on Google Play services. Smartphone functions such as calling, SMS messages, internet, Wi-Fi and Bluetooth work without GApps.

GApps means “Google Applications” and usually includes Play Store, Gmail, Google Calender, and more. If you have some of these applications, then you already have some GAPPS. Most users will only need to install GAPPS if they have installed a custom ROM that did not have GAPPS included.

If you want to access the glory that is Google Apps and services on your Android phone, you need Google Apps or GApps. Each GApps package will include Play, Camera, Keyboard, Gmail and much more. Of course, if you have the Play store, along with obligatory Play Services, you’ll have access to the entire catalogue of Google content whether it’s apps, music, movies, books and more.

For installation, you can refer this guide: Google Apps Installation Guide. 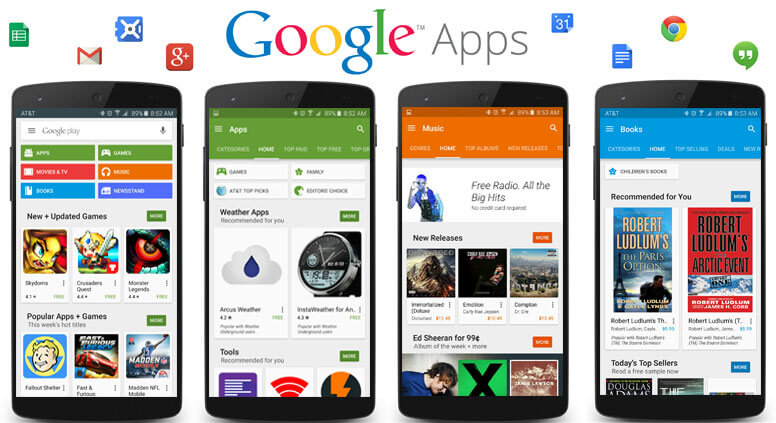 Google imposed a restriction on CyanogenMod and other Custom ROM makers to not to include Google apps in their ROM’s. Google provides these apps in a bundle for users.

So, if you want Gmail, Google Maps and Google play music, then you need to Flash GApps.

We need to “flash” these GApps on our ROM because there are stored as “System Apps” not as any other UN-installable apps. That is why we flash these apps.

Apps that are mandatory:

Now, you feel, you don’t need these but your phone needs it. Without these things, you can’t use the phone.

For proper integration of the Android ecosystem with the applications you install, the G-Apps provide the basic Google frameworks which need to have deep system-level access(achieved by flashing); so manually installed G-Apps(Play Store, Google Play Services etc.) would result in “crashed” OR “not responding” errors.

The easiest way to get the apps specified is by flashing the Micro Package and manually installing Maps & Play Music after that. However, if you want the smallest G-Apps installation available you can try Pico Package and get the Google Play functionality.

If you feel, you don’t need some apps. You can toss them out by using ES File explore. Make sure you have root option enabled in ES File Explorer and Goto /system/app or similar location and delete them. But have a backup of your ROM as you might run into issues later on.

There’s a replacement project MicroG in development and F-Droid is a comprehensive repository and “app store” for open source Android applications.