Android Marshmallow On Other Variants of Galaxy S3

As I mentioned before You can now install Marshmallow On S3.Android Marshmallow (Android 6.0) is now available for Samsung Galaxy S3, not officially but Via an AOSP build.This ROM developed brianelv by is functional and there are few bugs present but remember this the first release and we are sure in future update everything will be fixed.So if you want to install this ROM then follow this guide on How to install Android 6.0 Marshmallow On Galaxy S3 Via AOSP ROM.Below we share what’s working and what’s not.

rootmygalaxy.net will not be held responsible for any kind of damage occurred to your Galaxy S3 i9000 while following this tutorial.Do it at your own risk.

If you want to try this ROM then Follow the guide below on How to safely Download & Install Android 6.0 Marshmallow On Galaxy S3 Via AOSP ROM (i900 Model Only) 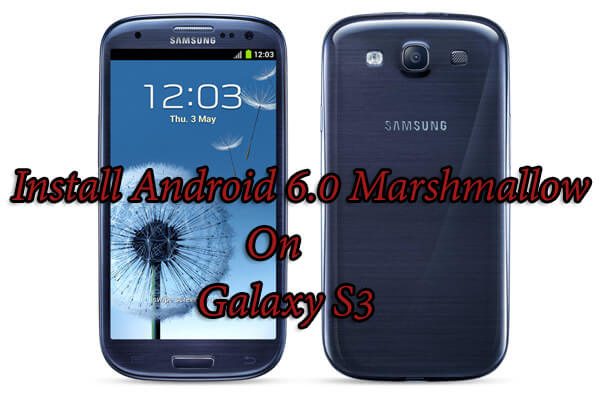 Step 1. First Of all Download the AOSP ROM and Gapps file from above.

Step 2. Then Connect your device to PC and transfer the ROM and gapps file to it. Disconnect the device then. Remember the location of the files on device.

You will enter recovery mode soon, and should see TWRP recovery. If you see an Android with an exclamation mark, then you need to install TWRP recovery for this (linked above).

Step 4. Once you are in TWRP, Follow this step by step guide to safely Install Android 6.0 Marshmallow On Galaxy S3 Via AOSP ROM–>>How to Install CM13 Or AOSP Marshmallow ROMs Via TWRP Recovery On Any Android Phone