There is an unofficial functional CyanogenMod 13 (CM 13) ROM available for Htc One M7 (International, AT&T and T-Mobile).This ROM is not available for CDMA HTC One M7 (Verizon and Sprint).This ROM is developed by dev Explore The Universe (Xda).

This is the first release of the CM 13 ROM so there are few bugs present but we are sure in future updates everything will be fixed and fully function.We don’t recommend this ROM to use as your daily driver but if you want to test Android 6.0 Marshmallow on you Htc One M7 then you should try this CM 13 ROM.Htc One M8 has received the official Android 6.0 Marshmallow update and now it is clear M7 will not get the Marshmallow update.Don’t worry in future there will be many marshmallow based ROMs for Htc One M7.But For there is only this CM 13 ROM available to download.Below we share some bugs:

Below we share full detailed step by step guide to Install Cyanogenmod 13 / CM 13 Rom On HTC One M7 Android Marshmallow 6.0

rootmygalaxy.net will not be held responsible for any kind of damage occurred to your Htc One M7 while following this tutorial.Do it at your own risk.

For more details on the ROM visit the official Xda Post

How to Install CM 13 Rom On HTC One M7 Android Marshmallow 6.0 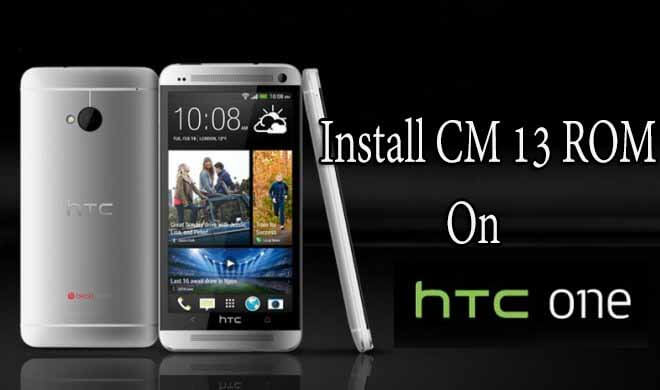 Step 1. First Of all, Download the Marshmallow ROM (CM 13) and gapps file from the above links

Step 2. After that Connect your device to PC and transfer the ROM and Gapps file to it. Disconnect the device then. Remember the location of the files.

Step 3. Boot your Htc One M7 into recovery mode. If you are rooted, you can use Quick Boot app from play store.

Step 4. Once in TWRP, Follow this step by step guide to safely Install CM 13 ROM On Htc One M7 –>>How to Install CM13 (CyanogenMod 13) Via TWRP Recovery On Any Android Phone