Its march security patch update time and literally everyone is joining in the bandwagon of providing updates to their flagship devices and the latest of them after Sony and ZTE is, OnePlus. OnePlus has become a very popular OEM when it comes to providing excellent support for their phones ranging from Hardware, Software and quick updates. OnePlus last year launched the OnePlus 3 and later the OnePlus 3T smartphone in India. This devices have been hugely popular in the Android community for their near-stock android experience and top-notch hardware that htis phones provide. Both this phones come with 6GB of RAM and upto 128GB of internal storage.

OnePlus is rolling out the OxygenOS 4.1.0 update to OnePlus 3 and OnePlus 3T devices, which already run on Android 7.1.1 OS thanks to the update that came out in the beginning of this month. Today, still based on 7.1.1, the OxygenOS 4.1.0 brings further improvements to both devices over current 7.1.1 build. The update also brings with it some new features which include added expanded screenshots, improved picture taking of moving objects with blur reduction and improved video stability when recording.

The update is being rolled out over the air and thus will reach only a small percentage of users today with broader rollout hitting in a few days. 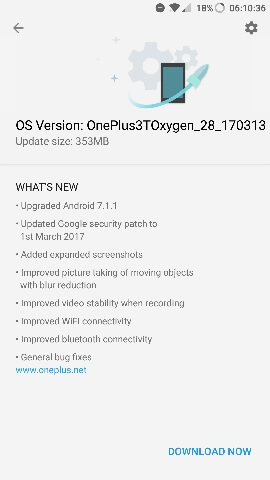 The most important thing while doing any updates is that your phone must be fully charged or it must be plugged-in while the update process is in progress. It is not advisable to interrupt the installation of any updates in between because it may cause some damage to the phone.