We know OnePlus as a leading premium smartphone manufacturer but now, the company seems to be targeting the budget smartphones also. Last week, a report came out mentioning OnePlus is working on a budget smartphone named “Clover” which will be powered by Snapdragon 460 SoC. 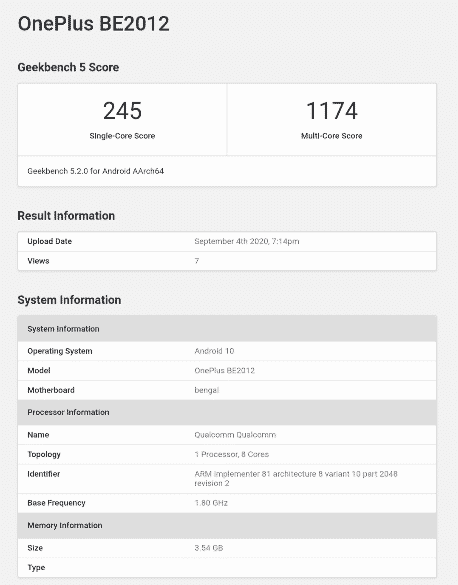 A new OnePlus device with model number BE2012 listed in the Geekbench database, which is the upcoming OnePlus Clover, as per MySmartPrice. The listing reveals a 1.8GHz octa-core Snapdragon 460 chipset paired with 4GB of RAM and Android 10 OS out of the box. The device has scored 245 points in the single-core test and 1174 points in the multi-core test.

A report from AndroidCentral claims that OnePlus Clover will be priced at $200 (roughly Rs 14,700). Further, the report adds full specifications of the phone. According to it, the phone will feature a 6.52-inch LCD display with HD+ (1560 x 720 pixels) resolution. It will run Android 10 with Oxygen OS 10 at the top.

The phone will feature a triple camera setup on the back which includes a 13MP main camera and a couple of 2MP sensors. OnePlus clover might feature a 6,000mAh big battery with 18W fast charging support. The phone is expected to have a single storage option: 4GB RAM and 64GB internal storage.