Users can update their Nexus 5x Via OTA.If your Nexus 5x is not rooted or its bootloader is locked then you can get the update notification.To update Via OTA, Go To Settings–>>About Phone–>>System Update.But you have to manually Flash / Install Android 6.0.1 MMB29K On Nexus 5X Marshmallow Official Factory Image if your bootloader is unlocked.Don’t worry we will be providing Full step by step guide with direct download links to Install Android 6.0.1 MMB29K On Nexus 5X

This is the First Android 6.0.1 Update for Nexus 5x.The Update is more focused on Security issues and stability.This is a minor update but from stability point of view it is a good one

rootmygalaxy.net will not be held responsible for any kind of damage occurred to your Nexus 5X while following this tutorial.Do it at your own risk.

->Install USB Driver for Nexus On your PC->Usb Drivers

->This guide is only For Nexus 5x  (Code Name- Bullhead) with an Unlocked bootloader.So don’t try on other devices 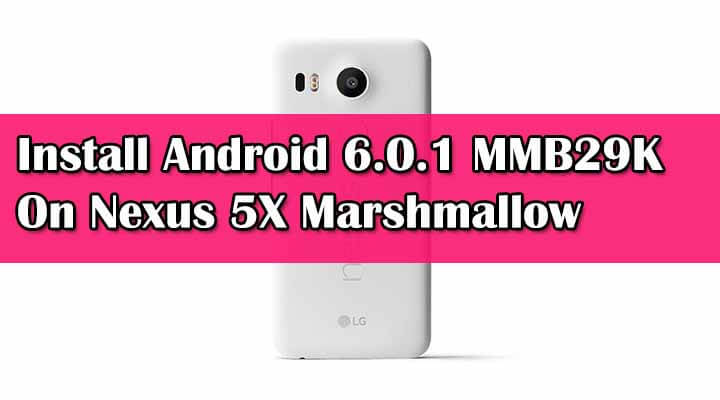 Step 1. First Of all, Download Android 6.0 Factory Image on the desktop of your PC for Nexus 5X from the above link

Step 2. Unlock bootloader of your Nexus 5X device, if you haven’t done this already. Help is here.

DONE!!!. Once all files installed, your Nexus 5X device will have the MMB29K build running.