Nokia will bring two new phones to India soon, One of them is a feature phone and the other one is a smartphone. The official Nokia Mobile India Twitter account confirms this through a teaser video. The video confirms that the smartphone will have a single front-facing camera and has thick bezels at the top and bottom. It is speculated that the smartphone is Nokia C3 because the design revealed in teaser video matches the Nokia C3 image leaked by NokiaPowerUser. Details about the feature phone is a mystery. 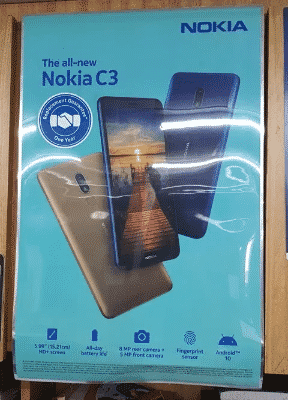 The Nokia C3 will feature a 5.99-inch HD+ display and a 5-megapixel front-facing camera. On the back, it has an 8-megapixel sensor and a fingerprint scanner. It will be powered by an octa-core processor paired with 3GB of RAM and 32GB internal storage.

The handset runs Android 10 OS and measures 159.6×77.0×8.5mm. It packs 3,040mAh battery and has a dedicated button for Google Assistant. Other features include 3.5mm headphone jack, microUSB port, Wi-Fi, Bluetooth, and GPS.