Xiaomi has started building hype for the Mi 11 series, which is scheduled to launch on December 28 in China. Today, the official WeChat account of the Xiaomi teased that Mi 11 screen could be the most expensive screen in the mobile phone industry. Also, Xiaomi Mi 11 will be the first phone to use Corning Gorilla Glass 7 in its domestic market. The company on Weibo shared more details about the smartphone. Xiaomi reveals that Mi 11 screen will be a breakthrough in high-end screens regardless of the cost. The screen has 13 new breakthroughs and the cost is comparable to a mainstream TV screen. 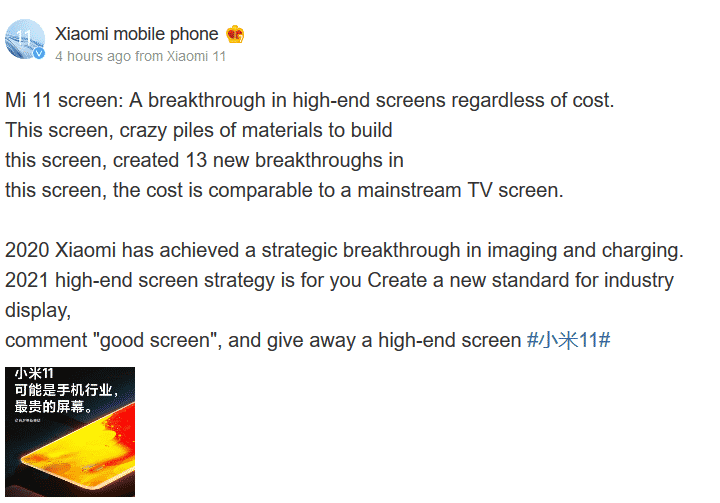 Ahead of the launch, some official images of Mi 11 leak that reveals its complete rear design and color options. So, the Mi 11 will come in four colors. The device has triple cameras and the primary sensor is said to have 108-megapixel resolution. It is already confirmed that Mi 11 will launch as the first Snapdragon 888 powered smartphone on December 28.