LG G4 is the Flagship phone of LG for 2015.The phone has already received Android 6.0 Marshmallow update from the manufacturer.If you haven’t updated yet then follow our guide linked below:-

If you don’t like the stock ROM of LG and want a cleaner ROM, then what will be a better choice than CyanogenMod ROMs.Team CyanogenMod has released CyanogenMod 13 a.k.a CM 13 Nightly ROMs for LG G4.Now you can download the CM 13 Nightly ROM from their site and Flash them on  your LG G4 via Custom recovery like TWRP.If you don’t know how to flash custom ROM then go to the below guide on How to Safely Install CyanogenMod 12.1 Nightly On LG G4 H815 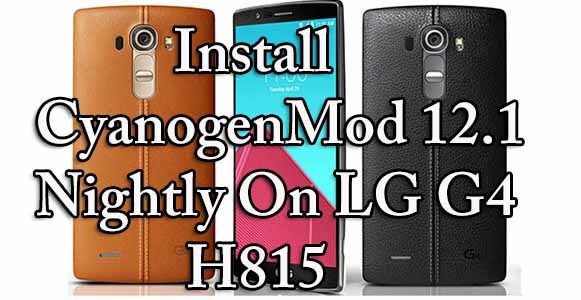 To boot into TWRP, first turn off your device and then press and hold volume down and power keys at the same time. If you see the TWRP logo, that means you have successfully booted into the recovery