LG has updated LG G3 to Official Android Marshmallow 6.0 30B but if you haven’t updated your LG G3 to the latest Firmware, we have already posted Download & Install LG G3 Official Marshmallow Flashable ROM ZIPs Android 6.0.

After Updating to Latest Marshmallow 30B Firmware, you have to Install the Xposed Framework Again. Don’t worry we are going to share step by step guide on How To Install Xposed on LG G3 Marshmallow ROM 30B

Xpirt over at xda, created a small patch to add support for Xposed to LG G3 Android Marshmallow 6.0 30B firmware and thanks to him users can now install Xposed on their LG G3 running on Marshmallow update (30B)

Page Contents show
1. Warning:
2. Remember Before Following The Steps:
2.1. Downloads
2.2. How To Install Xposed on LG G3 Marshmallow ROM 30B

rootmygalaxy.net will not be held responsible for any kind of damage occurred to your LG G3 while following this tutorial.Do it at your own risk.

Remember Before Following The Steps:

→ How To Safely Install Xposed on LG G3 Marshmallow ROM 30B

How To Install Xposed on LG G3 Marshmallow ROM 30B 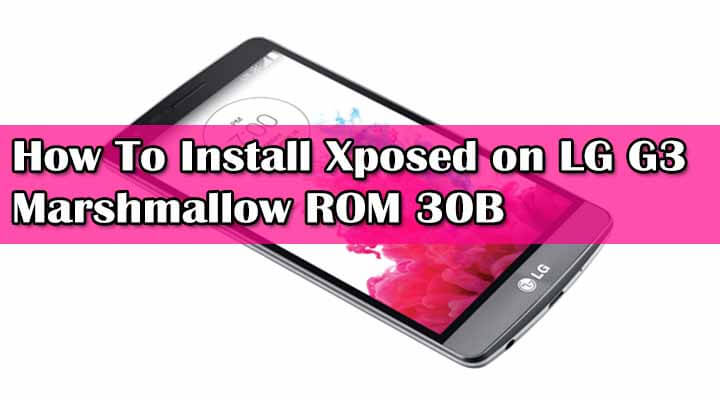