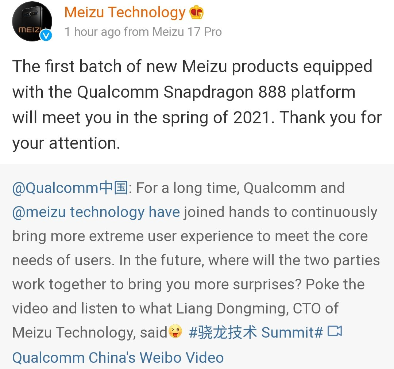 This new smartphone from Meizu most likely to be a successor of the Meizu 17 series, which is rumored to be called Meizu 18 series. The Weibo post reveals does not reveal the actual launch date but teased that it will launch in the spring of 2021.

Past rumors suggest that the Meizu 18 will feature a 3K OLED display, stereo speakers, and dual-line motors. It is said to have a 48-megapixel primary shooter at the back with ZEISS optics. The smartphone may support 120W fast wired and 45W wireless charging.