After a hectic year, the Chinese OEM OnePlus is now planning to launch its upcoming affordable flagship device named OnePlus 8 Pro. According to some of the leaks and reports, the OnePlus 8 Pro is expected to announce by March 2020. The image also surfaced online and it looks almost identical with OnePlus 7T Pro (except the rear camera module) and obviously the upcoming device model will be the successor of OnePlus 7T Pro.

This time, OnePlus may launch some new colour variant of the OnePlus 8 lineup which will be interesting to see. Meanwhile, the reports are coming out that the OnePlus 8 Lite may not arrive in India as well. A popular tipster @thedroidleaks has shared some specs as well as new renders with us. We have attached his renders down below where some of the specs of OnePlus 8 Pro have been mentioned.

As we all know that Corona Virus has been spread out all over China and some other countries have also affected with this virus. So, most of the device launch events are postponed or delayed officially. Therefore, we need to wait for the official announcement. 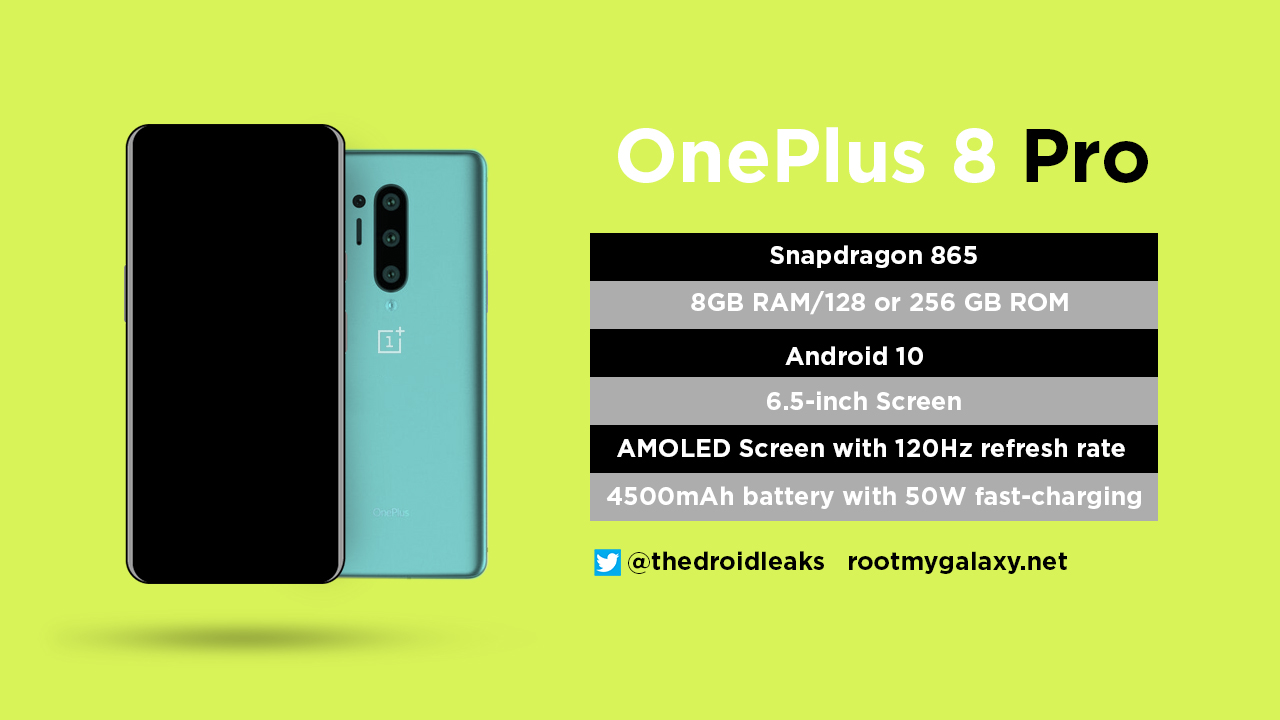 Now, talking about the OnePlus 8 Pro model, it will come with the flagship Qualcomm Snapdragon 865 SoC, 8GB RAM, 128GB/256GB of internal storage option, a 6.5-inches Super AMOLED screen with 120Hz refresh rate, HDR10, Always-on display support, etc. While the handset will sport a 4500mAh battery with 50W fast charging support. As we also know that OnePlus releases a McLaren version every year with the highest 12GB of RAM variant, we can also expect for a OnePlus 8 Pro 12GB RAM variant.

Additionally, the handset will have a punch-hole selfie camera on the display which also looks cool enough. There is a quad rear camera setup along with an LED flash and the OnePlus branding on the backside. Till then, keep visiting the blog for more info.