Realme is gearing up to launch a new 5G phone called Realme 7 5G. This will be the fourth device in the Realme 7-series, the other three are – Realme 7, 7 Pro, and 7i. Today, the upcoming Realme 7 5G bearing model number RMX2111 appeared on Thailand’s NBTC certification which hints at an imminent launch. 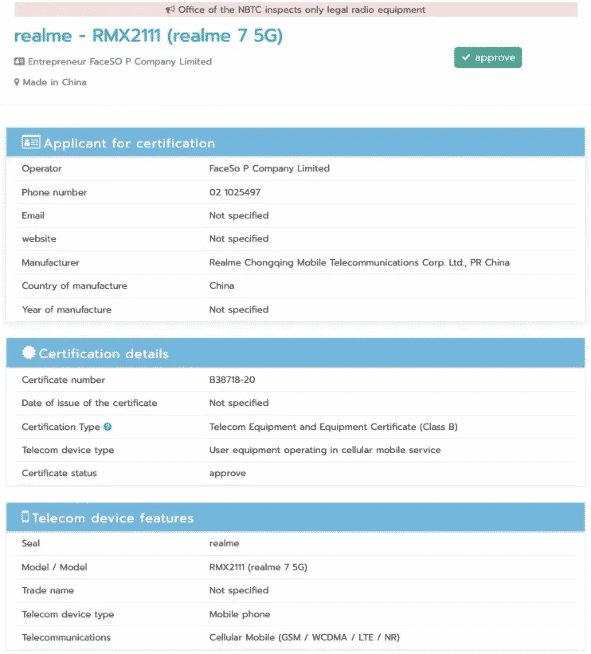 The Realme 7 5G is not a new device as the model number (RMX2111) associated with the device already belongs to the Realme V5 5G. The V5 5G was launched back in August and was made exclusive to China only. So most probably, the Realme 7 5G will debut as a rebranded version of V5 5G for the global market.

The NBTC certification fails to reveal any more details of the device. As of now, there is no word from Realme regarding the launch of Realme 7 5G, but we expected it to happen soon in the coming months. The V5 5G in China was launched with a starting price of CNY 1,499 (~$227/Rs 16,900). The Realme V5 5G features a 6.5-inch LCD display with 1080 x 2400 pixels resolution and a 90Hz refresh rate. Under the hood, it is powered by MediaTek Dimensity 720 chipset that is paired with up to 8GB RAM and 128GB internal storage. The phone boots Android 10 OS with realmeUI on the top.

Around the back, it sports a quad-camera setup which includes a 48MP main camera, an 8MP ultrawide lens, and two 2MP sensors for depth and macro shoot. For selfies and video calling, there is a 16MP shooter on the top-left corner. The phone packs a 5,000mAh battery and supports 30W fast charging. For additional security, the Realme V5 5G has a side-mounted fingerprint scanner.