If you’re waiting for the upcoming Xiaomi Mi 10 series devices then you should start rejoicing as Xiaomi has recently teased a couple of poster images where we can clearly see that the Mi 10 series will be equipped with UFS 3.0 storage. It’s the next-gen flash storage that offers a higher data read/write speed, improves reliability, and more. Xiaomi also has mentioned that the UFS 3.0 storage will have a 100% speed than the previous generation UFS 2.1 flash storage version.

The UFS 3.0 storage is currently the fastest flash memory in the industry and the mass production of the next-gen UFS 3.1 storage will start in April 2020. If you don’t know, the UFS 3.0 storage interface has a bandwidth up to 2900MB/s which is twice the UFS 2.1 storage and 6.25-times faster than the eMMC 5.1 storage. 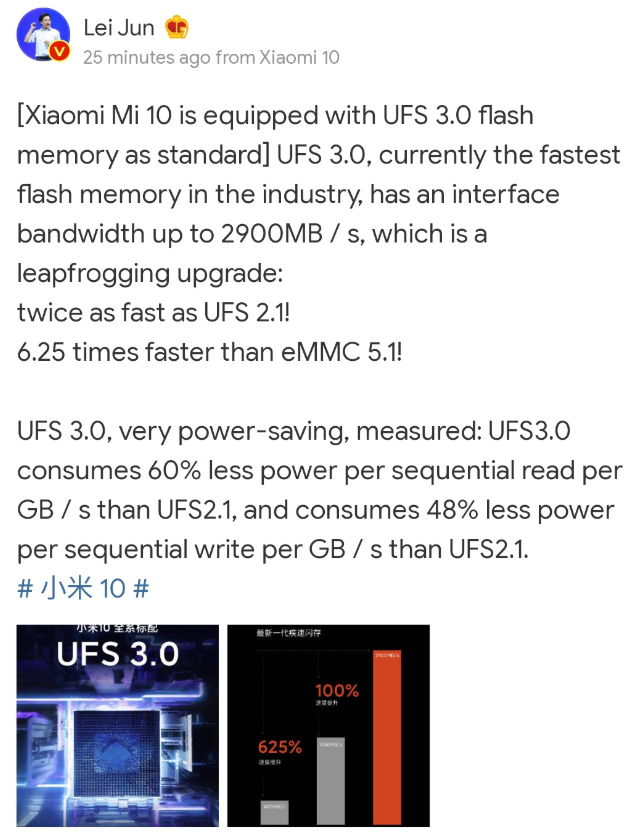 Now, talking about the launch of the Mi 10 series devices, Xiaomi has released an official press invite that mentions a global launch event in Barcelona on February 23, 2020. Additionally, the Mi 10 may also come with LPDDR5 RAM according to the reports. Till then, stay tuned for more info.