This article will guide you to Download & Install CM 12.1 ROM On Amazon Fire Tablet Android Lollipop.If you have an Amazon Fire tablet and you don’t like the UI of it then now time to install a CustomROM on it and CyanogenMod 12.1 is the best Choice for that.

The Amazon Fire Tablet is an android OS based tablet, but the UI is not close to Android’s.The Fire tablet features a heavily customized version of Android and sometimes it feels sluggish.

One of the most irritating factors of the Amazon skin is that there is no google Playstore present.They have replaced the play store with their’s own Amazon App store for downloading apps and games.So if you want to convert your Amazone Tablet to Nexus tablet (I mean UI), then just flash the CyanogenMod 12.1 ROM on it.Don’t worry we are going to share step by step guide on How to Download & Install CM 12.1 ROM On Amazon Fire Tablet Lollipop below

Thanks to developers over Xda for the CM 12.1 build.This is the First release of the ROM so there are few bugs there but not any major bugs.There are bugs like“broken bluetooth functionality”, but other than that the ROM is pretty good to install as daily driver.

→This is only for Amazone Fire Tablet so don’t try this on other models.

rootmygalaxy.net will not be held responsible for any kind of damage occurred to your Amazone Fire Tablet while following this tutorial.Do it at your own risk.

How to Install CM 12.1 ROM On Amazon Fire Tablet Lollipop 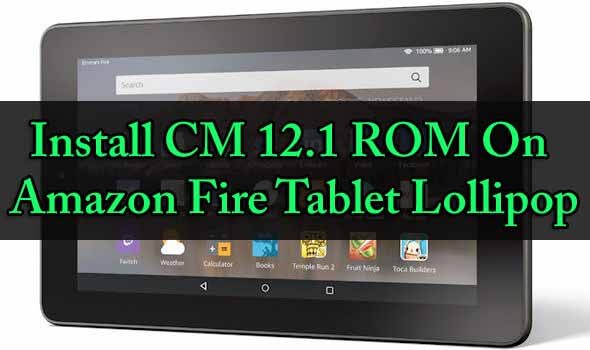