The smartphone is pending an update to Android 8.0 Oreo which is the latest version of Android and we are sure that this update will be released soon for the smartphone. However, we have received information that a new update is coming to the Galaxy Note 8 users in the US on the Verizon network. This update has been released by Verizon which is a carrier in the US and this update bring the latest November security patch to the device. Talking more about the update, the latest update on the smartphone comes with build number N950USQS2BQK2 and it is available for the Verizon Galaxy Note 8’s.

This update will install the November security patch which brings a bunch of security updates like the KRACK WiFi fix. The KRACK vulnerability affected all the Android users around the world and this update should fix the security flaw so it recommended that you download and install this update to your smartphone at the earliest in order to protect yourself from any security risks that can be caused. Now, this update is rolling out over the air by Verizon and your device will receive the update automatically so make sure to install the update once it has been downloaded on your device. 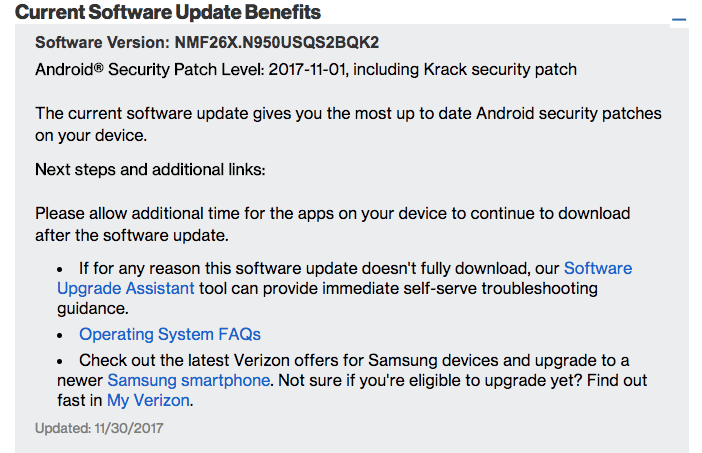 The update is a very small update.The Update is still based on Android 7.1.1 Nougat.Many Verizon Samsung Galaxy Note 8 users have already received the N950USQS2BQK2/KRACK Fix/November 2017 OTA Security Patch Update.You can manually check the update from  Settings » Software update menu and tap on Download updates manually.If there is no update showing on your device, then wait for few days for the update to come to your device.