Full List Of Best Xiaomi Redmi 4A Custom ROMs: Xiaomi’s entry and mid-range devices are hugely popular in Asian countries. Xiaomi’s Redmi 4A is no exception. There are many users who are using the device as their main device and there are loads of development happening on the device too. There are many custom ROMs and kernel made available for the device. Here in this post, we are going to share the best custom ROMs for Xiaomi Redmi 4A.

If you have been using the Redmi 4A for a quite some time, you may have got bored using the stock MIUI skin it came with and you may want some different look to it. In that case, custom ROMs come into play. Here we will be sharing a detailed list of Custom ROMs available for Xiaomi Redmi 4A with download links.

The Redmi 4a is an entry-level Android smartphone which is powered by Quad-Core Snapdragon 425 Processor, having 2GB RAM With 16GB ROM and it has 5 Inch HD IPS Touchscreen Display. It also got 13MP PDAF Autofocus Camera With Dual-Tone LED Flash with 5MP FF camera. It has 3120mAh Battery.

Your device should have root access and TWRP recovery should also be installed to install this latest ROM. The download links and installation procedure is given with this article please read through. With the Android 7.1.2ROM, you will also need to download the latest Gapps supported by Android 7.1.1 Nougat to have the full experience.

Since Android is an open source platform, it allows the developer to take the source code from Google and then build a whole new version of operating system images for selected devices from scratch. Any custom or home-built app is known as a custom ROM. It replaces the stock ROM on your device and comes with a kernel that makes it a standalone operating system. 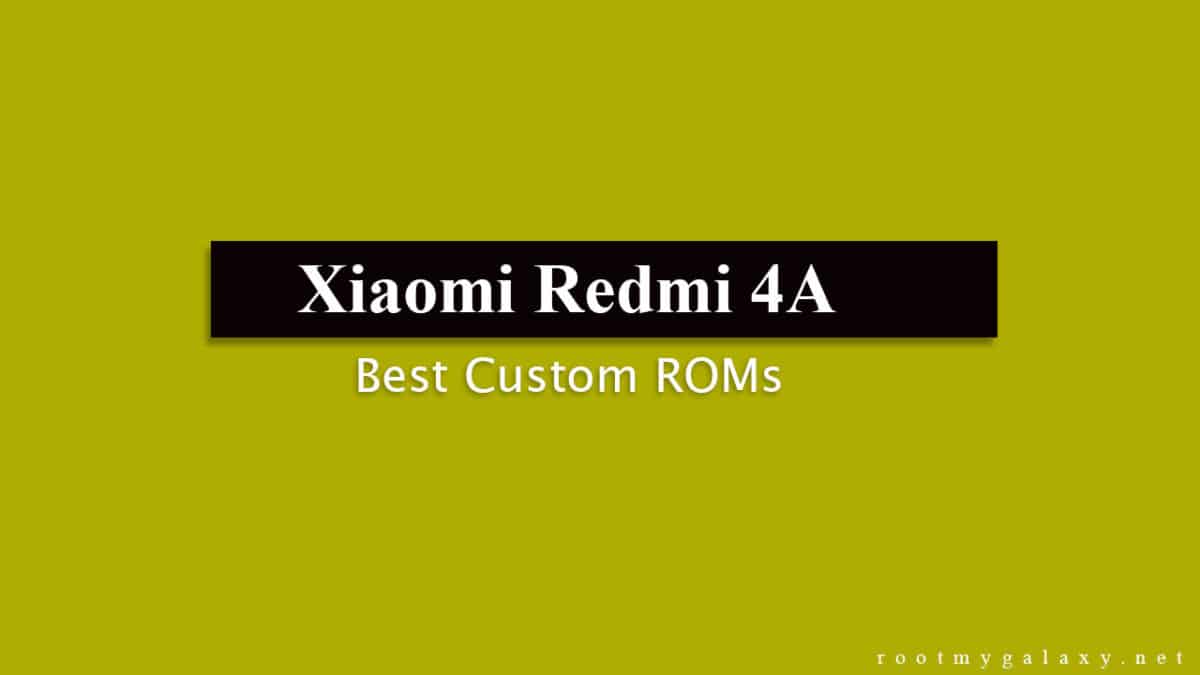 After installing the TWRP Recovery, you can easily flash any of the custom ROMs mentioned in this post. Not all the custom ROMs are meant to be stable enough for being used as a daily driver but there are a lot of options where most of them will work on your device. You can read about different custom ROMs in the description given below for best custom ROMs for Xiaomi Redmi 4A.

ViperOS is one of the news custom ROMs based on the AOSP codes while having their own custom mods. This line of custom ROMs has always been popular for its custom-made features from all CyanogenMod, Slim, Lineage, Omni AOSPA, etc. This ROM was developed when Google had just released the source code for Android 7.1 Nougat and now it has gone on to become one of the best and most stable custom firmware with a lot of additional features along with a balance between performance and battery. The ViperOS update for Xiaomi Redmi 4A has been released and it is based on Android 7.1.2 Nougat.

This is the cleanest Android available in the market. The ROM brings all the pixel features with some tweaks. Users will get the full Pixel Experience after flashing this Custom ROM. Check the guide linked below for Download and Installation instructions

For installing this update of Lineage OS for Xiaomi Redmi 4A, go to the link mentioned below.

AOSP Extended ROM is based on the source code of AOSP which brings a lot of exciting features. Since it is based on AOSP, it usually provides a smooth, and lag-free experience from the off. The developers of AOSP Extended promise their faithful users that they will add a lot of new and exciting features in the future updates. Similar to most other custom ROMs even AOSP Extended ROM comes with many features such as a Status Bar, Lockscreen customization, DU’s Nav Bar/Fling Bar, theming, AOSPA Pie, and much more.

Nitrogen OS 8.1 Oreo Custom ROM made it’s way to the device. It is a very clean Custom ROM based on Android 8.1 Oreo source code. The main focus of the ROM is performance and simplicity. It is one of the best ROMs when it comes to performance.

The latest version of dot OS is released and it is v2.2. Some devices have started getting the latest unofficial build of dot OS v2.2. Xiaomi Redmi 4A is one of them. The latest build v2.2 is based on Android 8.1 Oreo source code and it is an awesomely optimized custom ROM. Follow the linked guide to install it on your device

crDroid is a special line of custom ROM which was developed to increase the performance and the reliability of stock ROM for Android devices while also attempting to bring a lot of new features existent today. They are mostly based on the Lineage OS for using custom kernels compatible with them. crDroid has been released for Xiaomi Redmi 4A yet.

Resurrection Remix update for Xiaomi Redmi 4A can be downloaded by going to the link mentioned below.

The AICP update for Xiaomi Redmi 4A can be downloaded here.

SlimROMs is one of the lightest and minimalistic custom ROMs that can be found in the Android custom ROM market. This line of custom ROM is based on the AOSP (Android Open Source Project) source code and it comes with a lot of exciting handy features. One of the unique features of this project is the Slim Recents and the Slim PIE. This custom ROM has not yet been released for Xiaomi Redmi 4A.

Mokee is one of the newest custom ROMs that are based on the CyanogenMod (now, Lineage OS). It happens to be an Open Source Project which keeps on updating their source code to go along with the latest development without actually forgetting to merge all the special features. This community was launched in December 2012 and has quickly become a recognized and popular community of custom ROMs.Follow the linked guide below to download and install the ROM

AOKP or better known as Android Open Kang Project is a popular community of open-source replacement distribution for Android devices. This name is a play on the word kang which happens to be slang for a stolen code. The name started out as a joke but it stuck. It started out as free and open-source software by Roman Birg that was based on the official releases of Android Open Source Project by Google with some added third party codes, features, and controls. It is not yet released for Xiaomi Redmi 4A.

Flyme OS is a stock firmware developed by Meizu for their smartphones. However, it can also be used as a custom ROM for other Android devices. Some of its features include redesigned apps, performance optimizations, one-handed usability, and more. The current version of Meizu provides easier navigation while using only one physical button, distinguished flat design, and more. It is quite unique as the back button function can be implemented by tapping the physical button and the home button function can be used by simply pressing the physical button. It is not yet released for Xiaomi Redmi 4A.

XenonHD is a custom modified ROM which is available for wide range of Android device. It is based on AOSP and Lineage OS with additional features, performance and battery life improvements.

Stock Firmware For Xiaomi Redmi 4A

These were just some of the best custom ROMs for Xiaomi Redmi 4A. I hope you must have selected the custom ROM which is perfect to your liking. Leave a comment or feedback below if you have any queries. I hope this guide turned out to be helpful for you. Thank you.